What are natural gas generators? 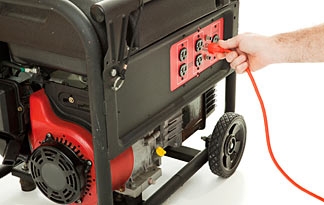 How much do you know about generators that run on natural gas?
iStockphoto/Thinkstock

Picture this: A hurricane makes unexpected landfall along the eastern United States and sweeps inland, pummeling cities far from the coast. As trees fall and power lines snap, millions of residents are plunged into darkness. Many people pull gas generators out of their garages and fire them up, but the solution is short-lived: With gas stations shuttered by the storm, the generators soon run out of fuel. But a few homeowners manage to keep their lights on and freezers cold as crews work to restore power, thanks to a new generation of generators that run on natural gas.

Natural gas generators, as the name suggests, use natural gas -- which includes the propane used for backyard grills or the methane that utilities supply through underground lines -- to generate electricity. They typically work like their gasoline-powered cousins: An internal combustion engine injects a mixture of fuel and air into a combustion chamber, where a piston compresses the mix. A spark plug ignites the fuel, driving the piston down and turning a crankshaft. The crankshaft, in turn, spins the generator's rotor in an electromagnetic field, generating an electric current that can charge batteries, power appliances or even run high-wattage tools, depending on the generator's size.

Unlike gasoline- or diesel-powered generators, natural gas generators must be able to burn a gaseous fuel rather than a liquid one. This requires a carburetor -- a device that blends a precisely metered amount of fuel and air and injects the mix into the engine's cylinders -- specially designed to manage pressurized gas.

Natural gas generators are sold in sizes from portable to industrial, or you can convert a gasoline/diesel generator to use propane with a conversion kit. Contact the National Fire Protection Association for important safety and legal guidelines before attempting such a conversion yourself.

Proponents of natural gas generators tout a number of benefits. Natural gas can be easier to access during a disaster (like the hurricane scenario) because it's carried in underground, wind- and storm-proof lines, and is readily available anywhere that gas grills are sold. It's also easier to store than diesel or gasoline. Diesel, for example, can grow fungus, become gelled or develop sediment if stored improperly. According to the Natural Gas Supply Association, as long as a propane container remains intact, the gas can remain useable for an indefinite period of time.

Natural gas generators aren’t without their drawbacks. According to one company that sells natural gas generators for home use, the up-front cost may be 10 to 20 percent higher than that of a comparable liquid-fueled model, though it can pay for itself in the long term through lower fuel costs -- the price of natural gas fluctuates less than petroleum for an equivalent amount of energy. But that payback may take five to seven years to realize.

Switching from oil-based fuels to alternatives such as natural gas can have benefits that go far beyond your wallet. Natural gases tend to burn cleaner than other fossil fuels, reducing the greenhouse gas emissions that cause global climate change. And a natural gas generator can run on gas from biological sources (methane mined from decomposing landfill waste, for example) as easily as it can on natural gas mined from underground gas deposits. As the world shifts away from oil-based fuels to a broad array of more sustainable energy sources, more people and businesses are incorporating natural gas into their energy plans.