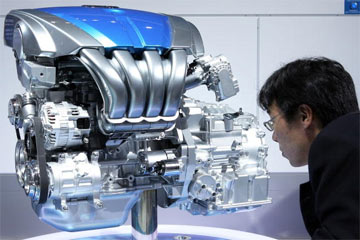 As noted earlier, cars that run on diesel fuel use direct injection by default. For a multitude of reasons, however, diesel hasn't captured the hearts and car-buying dollars of the American driving public in large numbers. It succeeded more readily in Europe, where fuel-efficiency may trump other concerns, such as noise and acceleration. (Diesels were once louder, slower and dirtier than gasoline cars.)

It should come as no surprise, then, that European automakers have taken the lead in developing gasoline direct injection technology. However, Japanese automaker Mitsubishi gets to claim "first" honors for making a GDI for a mass-market consumer vehicle. Mitsubishi introduced one in its Galant in 1996 for sale within the Japanese market [source: Just-auto.com]. Toyota soon followed suit, along with European automakers. Initially, though, the engines had difficulty living up to their promise of significant fuel savings.

U.S. manufacturers were aware of GDI at that time, but didn't aggressively pursue it until several years later. This may have been due to the fact that, in the late 1990s and early 2000s, oil and the gasoline derived from it were relatively cheap, which made the need for offering fuel-saving engines such as GDIs a little less urgent.

That has changed drastically, with Ford and GM now trumpeting the technological innovations to be found in their GDI designs. GM's Ecotec direct injection engine family will be a growing staple in its car and SUV lineup, with more than a dozen models slated to get Ecotec powerplants by the 2010 model year [source: Green Car Congress].

Also, Ford announced that more than 2.5 million vehicles will get its "EcoBoost" gasoline direct injection engine between 2009 and 2013. The company plans to put them in its Lincoln MKS, Ford Flex crossover and Taurus and claims that drivers may see up to a 20-percent increase in fuel efficiency [source: Ford]. Other manufacturers offering or planning to offer GDI engines include Audi, BMW, Hyundai, Kia, Mazda, Mercedes-Benz, Nissan, Lexus, Saab, Subaru and Volkswagen.

The big unknown is whether gasoline direct injection will get leapfrogged by more advanced technologies. Hybrid gasoline and electric engines have also captured the public's imagination. Plug-in systems that allow drivers to recharge car batteries from a home electrical outlet could eventually become widespread, too. And fuel cell-powered hydrogen vehicles may not be as far-off in the future as people once thought, as evidenced by the Honda FCX.

But most likely, automotive analysts say, direct injection will help serve as an evolutionary bridge to those more exotic options. So if you can't wait for the clean, silent "car of the future" but still want to save a little pocket change at the pump, a direct injection-equipped ride might be the ticket. For more information on engine technology, check out the links below.