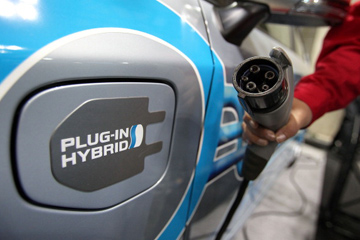 A member of the Toyota staff holds a charging plug next to a Toyota Prius Plug-in Hybrid during EV JAPAN, in Tokyo. See more pictures of plug-in hybrid cars.
Kiyoshi Ota/Getty Images

Charging plug-in hybrids on a smart grid is more than the simple transmission of power to the car's battery pack when needed. If plans pan out, and plug-in hybrids catch on, the grid and the cars could work in tandem easing the ebb and flow of power in the grid by alternately storing power and supplying power as needed.

PHEVs offer the best of two worlds -- the economy of an electric vehicle and the oomph of a gas engine. More importantly the car can shift between the two fuel sources -- gas and electric -- as needed, or as wanted. It's this last ability, the "as wanted" part, where PHEVs really shine. The owner can choose between the least expensive fuel, or a combination of the two, and save money in the long run. And that same gas engine can even recharge the batteries, or act as a generator on a smart grid if commanded to turn on.

However, while the technology is largely present to make the partnership a reality it has yet to be standardized or refined. Added to this is the push for all-electric vehicles over hybrids.

Yet the combination of PHEV and smart grid offers a glimpse of an intriguing future and one which could become viable.

Let's plug-in and look at what happens.

Generally your car's battery pack would be charged overnight, likely on a Level 2 system, when demand for electricity is lowest, as well as cost. Most estimates put the cost for electricity during this period, on average, as roughly the equivalent of $1 per gallon.

You drive to work, plug in at a charging station, and top off for the ride home. Once home, plug in again and be ready for the morning.

The advantage of a smart grid comes in when a normal day, from an electrical stand point, is no longer normal.

Imagine temperatures have climbed well into the 90s. Grid operators know there will be huge demand for electricity and prices will spike. The grid sends a message to your car, using wireless technology or "talking" over the power lines, telling it to use gas instead of electricity on the commute since electricity will be more expensive. The car gets the message then tells you when you get in and start it.

You arrive at work and demand is still high. You plug in and the grid sucks your battery dry to help meet demand. Don't worry; it's doing the same thing to all the other battery packs it can access as well. The amount of electricity it uses is credited to your account.

By mid-morning the peak is over and the grid starts recharging your batteries. By the time you leave for home the commute can be accomplished without gas.

Before any of this becomes a reality, however, more PHEVs and all-electric vehicles need to populate the roads. One of the ideas behind PHEVs on the smart grid is to use the cars as mobile battery sources. The more sources there are the more variability they offer, and the more users using the system.

Marc Geller, co-founder of Plug In America, an electric vehicle advocacy group, said much of the technology exists to charge electric vehicles effectively and prudently from the existing grid. Instead plug-in hybrids and electric vehicles are seen as the best place to push a smart grid into existence, whether it's time for one or not.

But the impetus is there and electrical utilities and auto makers are experimenting with smart grid technology as well as the one technology that may make it all happen -- the charging station.

PHEVs need juice, though, and most recharge through an electrical outlet or dedicated home charging system. The battery and electro-motive systems serve to save on gas by moving the car when it uses the most gas, such as from a standing start or low-speed maneuvers. The gas engine takes over at higher speeds when the car is most fuel efficient.

Some PHEVs use the gas engine to run a generator to recharge the battery pack. Others use the two systems in independent cooperation. Several major car companies, including Ford and Toyota, are experimenting with different PHEV technology, as well as all-electric vehicles.

Smart grid charging stations, though not a reality at this time, will likely take on two flavors -- the at-home station, and those used by companies and businesses.

Several places in the United States have installed charging stations capable of putting an almost full charge on an electric vehicle in only a few hours. These are generally Level 2 charging stations.

There are several companies now working with auto makers to bring something akin to a Level 3 station on line.

In 2010 GE trundled out the WattStation for commercial users. The station, at a price of more than $5,000, allowed businesses to install a recharging point for their customers that looked good and functioned well at Level 2 charging capabilities. Recently GE rolled out a wall mount electric vehicle charging station with Level 2 capabilities. The units cost a little more than $1,000, should be installed by professionals, and offer Level 2 recharging.

GE said the WattStation is designed to change with the coming smart grid and can be programmed to handle the potential expanded communication between car and grid.

While communication is the key to an effective smart grid most consumers want a charging station that powers up the car as quickly as possible.

The horizon technology for speed in 2011 is CHAdeMO. While more of a protocol than a distinctive technology, CHAdeMO uses DC voltage, a special plug, and a specific charging program to charge a typical battery pack in less than half an hour. This is the elusive Level 3 charging. AAA recently announced they will begin, in an unspecified time frame, offering an EV recharging service with a possible Level 3 capability using CHAdeMO.

A U.S. Department of Energy map showing charging stations offers a glimpse into a changing EV landscape as well as illustrating some surprises in the EV world.

For example, Washington State offers a relatively large number of public charging stations, between 100 and 200, not surprising for a very ecologically-oriented part of the country. Right up there with green Washington, however, is oil-rich Texas. California boasts 500, Kentucky has none.

For Geller, of Plug In America, the best way to see more stations is to produce more electric vehicles and have more on the road. "Right now the manufacturers can't meet demand," he said.

Once more EVs are out there the more people will accept the idea. The more they accept the idea, the more automakers will want charging stations at public places, businesses, and in homes.

Then CHAdeMO, the WattStation, and other stations designers and engineers are only toying with, will become reality.

Plug-in hybrid electric vehicles are something like an automotive missing link. The technology pairs a traditional, though usually much smaller gas engine, with a battery pack capable of moving the car as an electric vehicle or as an adjunct to the engine.