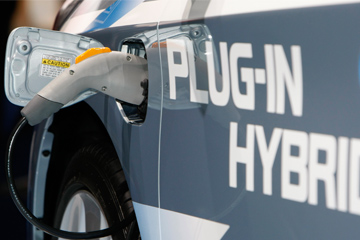 Hybrid vehicles, especially the Toyota Prius, have been steadily gaining in popularity for several years. Hybrids combine an electric motor with an internal combustion engine to use gasoline more efficiently. This not only saves money for the person who owns the car -- recharging batteries costs less than filling the tank with gas -- but reduces carbon emissions and saves wear and tear on the planet Earth itself. Hybrids, however, still produce pollution and they still use expensive fossil fuels; they just use less of them. Many people believe that the cars of the future will be fully electric vehicles, running purely on electricity supplied by large, rechargeable batteries. Recharging the batteries will cost considerably less than gasoline (at least at current prices) and the electric motors will produce no pollution at the tailpipe. Perhaps best of all, using electric batteries to power our cars won't reduce the Earth's gradually dwindling supplies of fossil fuels.

The wide adoption of electric cars is still several years in the future, though. There are issues concerning, among other things, the driving range supplied by the batteries and the lack of a widely available infrastructure for battery recharging. Nobody wants to take an electric car on an overnight trip only to find that he or she is stranded with a dead battery and can't get to a recharger. There is, however, an interim step between hybrid vehicles and battery-electric vehicles -- and it's available now. It's called a plug-in hybrid. A plug-in hybrid is essentially an electric car, but it has an internal combustion engine strictly for back-up power, so it's unlikely you'll find yourself in the middle of nowhere with a dead battery. Most hybrids are series hybrids, meaning that the internal combustion engine is used to recharge the vehicle's batteries, on the fly, when they start to run low.

How, exactly, do you recharge a plug-in hybrid? If you buy a Volt or have your Prius converted, exactly where are you going to plug it in? Mostly, you'll recharge it the same way you recharge any other rechargeable device, such as a cell phone -- you'll plug it into your house current. We'll talk about how that's done in the rest of this article. 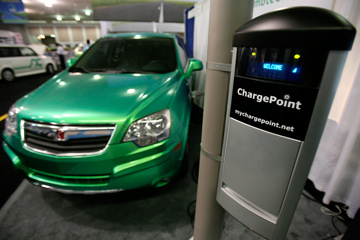 How Often do you Need to Charge Plug-in Hybrids?

How often you'll need to charge your plug-in hybrid depends on how far you intend to drive it each day. For regular commuting purposes, you'll probably need to recharge daily. The Chevy Volt plug-in hybrid is designed to travel about 40 miles (64.4 kilometers) per charge, so if your round-trip commute, including shopping and any errands you need to run, is less than 40 miles (64.4 kilometers), you'll need to charge every evening. It's best to do this overnight, because that will give you both the necessary time to recharge and will use the electric grid during off-peak hours, when kilowatts are cheap and you won't be straining the local power company's electric capacity. Also bear in mind that the Volt can run 300 miles (482.8 kilometers) per charge by using the built-in internal combustion engine to recharge the depleted battery on the fly, so in an emergency you can go a lot longer between charges. However, this defeats the purpose of having a plug-in hybrid in the first place. If you regularly need to travel such distances, a plug-in hybrid probably isn't for you.

The plug-in version of the Toyota Prius is projected to have a range of 12 miles (19.3 kilometers) per charge. Although this could change by the time the vehicle is available for sale, you'll probably mostly use it as a standard hybrid with an all-electric option. The Hymotion Plug-in conversion module for the current Prius might work better for the average commute; its advertised range of 40 miles (64.4 kilometers) per charge is comparable to the Chevy Volt.

How Long do Plug-in Hybrids Take to Charge? 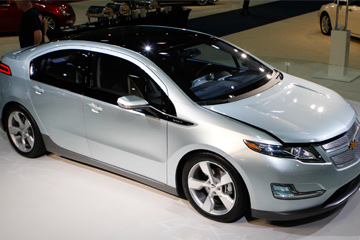 The Chevy Volt, an electric car that GM says will go 40 miles on an electric charge, is on display at the Washington Auto Show, on Jan. 26, 2010.
AP Photo/J. Scott Applewhite

If you buy a plug-in hybrid vehicle, how long will it take you to recharge the batteries? Will recharging the plug-in be the equivalent of a quick trip to the gas station for a refill or more of an overnight wait?

Probably closer to the latter. A couple of pages back we mentioned that the Chevy Volt will come with two different chargers, a 120-volt portable charger that runs off a typical household electric outlet and a 240-volt charger that will be hardwired into your home's electrical system. The 240-volt charger provides the fastest charge. General Motors estimates that a full recharge with the 240-volt charger will take about three hours. The 120-volt charger will take six hours for a full charge if set at 12 volts and eight hours if set at 8 volts. How will you know when the charging is complete? An indicator on the dashboard will tell you when the battery is at full charge, so you can be sure you have a full 40 miles (64.4 kilometers) worth of power in your car before you head off to work in the morning. The Hymotion plug-in modification for the Prius is similarly designed for an overnight charge.

This sounds pretty slow to those of us accustomed to taking five or 10 minutes at the gas pump, but the Volt is intended primarily for day-to-day commuting and errand running, where a midday recharge isn't likely to be necessary. Most people using the vehicle for these purposes will be able to stay within the daily 40-mile (64.4-kilometer) range, occasionally falling back on the extended range made available by the internal combustion engine. The Volt can then be charged overnight, while the owners are asleep and inexpensive off-peak electric rates apply.

Speaking of inexpensive off-peak rates, how much will recharging a plug-in hybrid's battery pack cost? Probably less than you think. We'll talk about that on the next page.

Cost of Charging a Plug-in Hybrid

If you're contemplating buying a plug-in hybrid vehicle, the main question on your mind is probably how much it will cost to keep the batteries charged relative to the cost of the gas that you normally put into an internal combustion engine vehicle. To help you make the comparison, the Environmental Protection Agency (EPA) has come up with a new measurement called the Petroleum-Equivalent Fuel Economy Calculation or PEF. It allows you to compare the fuel economy of a hybrid or electric vehicle with a car that runs on a gas engine. The calculations that go into the PEF are complicated (you can read about them on the EPA Web site), but in practice all you need to do is to compare the PEF with the normal EPA fuel-efficiency figures to see how much electric "fuel" your hybrid needs to go a given number of miles. For instance, the PEF for the Chevy Volt plug-in hybrid is 230 miles per gallon (97.8 kilometers per liter), making it the first production car with a three-digit EPA rating [source: Valdes-Dapena]. Of course, it's not actually going to be using gallons of gas except when the 40-mile (64.4-kilometer) battery range is exceeded, but this gives you a rough idea of how its fuel efficiency compares with other cars that do use gasoline.

Perhaps a better way of looking at this is that General Motors estimates that it will cost 80 cents to give the Volt a full 40-mile (64.4-kilometer) charge using house current. Hymotion estimates that its plug-in for the Prius will cost even less, about 50 cents per 40-mile recharge. Further, GM says the Volt will run 100 miles (160.9 kilometers) on $2.75 worth of electricity, or about 3 cents per mile. Obviously this is going to vary according to how much your local power company charges for electricity and it'll vary according to whether you charge at peak hours or off-peak hours, but it's considerably cheaper than gasoline would cost for an equivalent distance. Another figure offered by GM estimates that a Volt driven for 15,000 miles (24,140 kilometers) per year without ever exceeding the battery-only range would use $300 worth of electricity annually. By comparison, a car with an internal combustion engine that average 30 miles per gallon (12.8 kilometers per liter) would cost $1,500 annually for the same amount of driving.

This is, in fact, the major advantage of driving a plug-in hybrid. These vehicles may have a limited range and take a long time to charge, but they'll be about the cheapest ride you can get until fully electric vehicles are available.

For more information about the plug-in hybrids and other related topics, follow the links on the next page.