What is the plug-in electric vehicle credit? 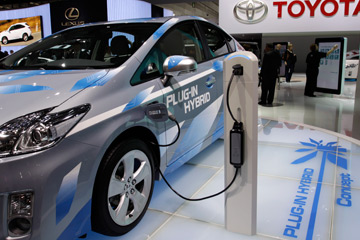 Journalists have expended countless column inches over the years trying to answer the question, "Does it pay for a typical car buyer to purchase a hybrid gasoline-electric vehicle?" The answer has proven elusive, probably because it's nearly impossible to place a price tag on the psychological reward of driving a cleaner-running car.

As part of the American Recovery and Reinvestment Act of 2009 (commonly referred to as the Stimulus bill), Congress decided to make that calculus a little bit easier for consumers, by providing a tax break to people who buy certain electric-powered vehicles.

This "plug-in electric vehicle credit" seeks, like many tax incentives, to encourage certain public behavior. In this case, the credit is encouraging citizens to buy plug-in hybrids.

A few years ago, people typically didn't need to plug in hybrid vehicles. If the electric charge on, say, your Honda Insight or Toyota Prius ran low, the car's computer would simply request its on-board gasoline engine to replenish the charge. Now, however, with electric conversion kits and new hybrid vehicles intended to run primarily on electric motors, it's considered "normal" to plug in some hybrids at home for their nightly recharge.

Keep reading to find out what plug-in hybrid owners must do to qualify for the plug-in electric vehicle tax credit.

So what are the rules of the road for consumers who'd like to get a nice, four-figure check from the U.S. Treasury as acknowledgement for buying a plug-in hybrid?

You can find out complete details from the Internal Revenue Service Web site. In a refreshing change, the IRS explains the rules, limitations and procedures in fairly straightforward language -- on this particular topic, anyway. Here's a summary:

Let it be known that you shouldn't construe anything in this article as definitive tax advice. For that, talk to your accountant or other qualified tax professional. Clearly, though, Uncle Sam wants us taxpayers to purchase and drive plug-in hybrids as one way to stimulate the economy. And he's willing to give us back some of what he takes from us in order to make that happen.

For more information about the plug-in vehicle credit and other related topics, follow the links on the next page.