How do plug-in hybrids' mileage compare to other cars? 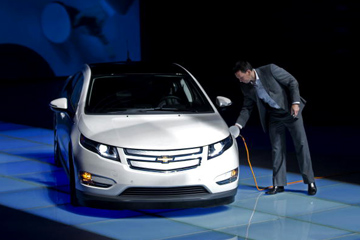 A staff member of GM China charges up a Chevrolet Volt during a ceremony to send a pair of Volts to Shanghai Expo Bureau in Shanghai, China. See more pictures of plug-in hybrid cars.
China Photos/Getty Images

A decade ago, hybrid cars were the hottest, newest form of environmentally friendly and fuel-efficient motoring. But while hybrids have come to establish themselves in the car market, there's an even newer and more high-tech form of green car on the horizon: The plug-in hybrid.

As you may already know, plug-in hybrids are gasoline-electric vehicles similar to regular hybrids. The main difference is that their batteries are charged by plugging them in to outlets in your garage or at specialized charging stations. In theory, this makes them superior to standard hybrids because they can run on electricity for greater durations, and in some situations, they can get you where you're going without using gasoline at all.

In order to examine how plug-in hybrids' mileage compares to other cars, let's look at the plug-in hybrid cars currently on the market. One of the best examples is the Chevrolet Volt, which General Motors calls an "extended-range electric vehicle" but could also be described as a plug-in hybrid.

Toyota is set to release a plug-in version of the Prius called the PHV in 2012. While it can only drive for 13 miles (20.9 kilometers) on electricity alone, after that, the car switches over to the same hybrid gas-electric system as on the regular Prius. This means it could achieve even better mileage than the Volt, which runs only on gasoline once it has expended its electricity reserves [source: CNN].

While it may seem like owning a plug-in hybrid car is a great way to save money because you're using less gas, remember also that these cars have a heavy cost premium over cars with "regular" engines. You'll also be responsible for a higher electric bill since you'll be charging them in your home. But there's no question that plug-in hybrids represent a greener, more Earth-friendly driving experience.