Can I use solar power to recharge a plug-in hybrid? 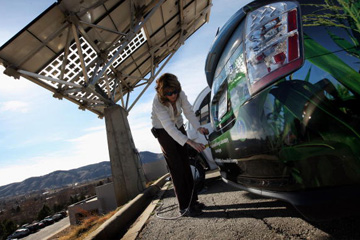 Heather Lammers plugs in a Toyota Prius Hybrid, which was being recharged by a solar energy panel at the National Renewable Energy Laboratory (NREL) in Golden, Colo. See more pictures of plug-in hybrids.
John Moore/Getty Images

Solar cells can provide electrical power for anything under the sun -- including plug-in hybrid vehicles. An array on the roof of a house in a sunny spot often generates more power during daylight hours than the household can use, especially if no one is home to use it. Some cities, like Portland, Ore., allow solar customers to sell this power back to the grid.

But then at night, when these homeowners return with their plug-in hybrid or all-electric vehicles, they need electricity to charge the car, turn on reading lamps, run the microwave and watch "Dancing with the Stars." The solar cells aren't creating electricity after sunset, so the house pulls power from the grid. At the end of the month, customers get a statement showing how much electricity they generated and how much they used.

But the cars of the future -- maybe even the near future -- might not even have to rely on a house for their solar power. The Fisker Karma plug-in hybrid car has the most powerful solar roof panel to be used on a car so far. Its 80, super-efficient, monocrystalline cells generate up to 120 watts of power, which is used to run the climate control system while the driver is away. The rooftop solar cell system also adds about 200 miles (321.9 kilometers) per year to the car's range -- for free. That's the equivalent of an extra tank of gas every year in a conventional car being provided by the sun.