What is the purpose of a seatbelt pretensioner? 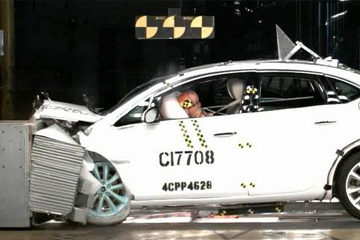 Here's a cheerful stat to make you want to take the 'ol grocery getter out for a spin: If you live in the United States, you stand a 1-in-84 lifetime risk of dying in a car accident. While expiration by auto doesn't hold a candle to the number 1 killer, heart disease (1-in-5 chance), it holds its own as one of the more likely ways any of us will kick the bucket [source: Parker-Pope].

The good news is that if you are in a car accident, you can cut your chances of dying in half just by the simple act of wearing a seatbelt [source: Centers for Disease Control]. In addition, faster than a person can even react, a modern seatbelt retracts forcefully to adjust occupants into a safer seating position when the airbags deploy.

Consider yourself fortunate if your vehicle's seatbelt pretensioners never have to see action in their intended purpose. If they do, that means the front of your car or truck has smacked into something else head-on, and pretty hard. It's highly likely the front airbags inflated, too.

The pretensioner mechanism uses an explosive charge to drive a concealed piston when sensors detect the signature abrupt deceleration of an accident. The piston, in turn, rapidly drives the spool around which the fabric strap of a seatbelt is wrapped. That incredibly fast retraction of the belt fabric removes the slack from the belt instantly. This extra seatbelt "pre-" tension, moments prior to the full force of impact, pulls the bodies of the driver and front-seat passenger firmly into their seats. This positions them so as to receive the maximum protection benefit of the front airbags. It also helps prevent the unfortunate phenomenon car crash-ologists call "submarining." That's when the momentum caused by the crash jerks a victim's body under his or her lap belt and sends it careening forward below the dash.

Cars and light trucks aren't the only place in which the use of seatbelt pretensioners has clicked. One of the earliest ancestors of modern, automotive pretensioner systems was one proposed for military aircraft pilots in the 1950s. In 1958, inventor Royce Strickland, Jr., submitted a patent application for a contraption he called a "harness inertia reel." It was an explosive gas-driven device that cinched pilots into their ejection seats before they were blown out of an airplane [source: Strickland].

While few of us will ever have to bail out of a stricken fighter jet mid-flight, it should be somewhat re-assuring to know that similar, seatbelt pretensioner technology will help keep us anchored if we ever get into a head-on car collision.

Between saves by motorcycle helmets and seat belts in assorted vehicle mishaps, I'm probably on my fifth or sixth life in cat terms. So learning for this article about the various ways one can "buy the farm" (or just lease it, if you get off with mere paralysis) by forgetting to wear a seatbelt held, well, a certain macabre fascination for me. It also prompted a less creepy thought: How cool is it that the same pretensioner concept used in combat plane ejection seats protects civvies in their cars, as well? Countless auto accident survivors literally owe their lives to a handful of inventors who enhanced the seatbelt into an active restraining device, by developing the seatbelt pretensioner. I confess to having some mixed feelings about the ongoing nannyfication of car technology; but on balance, the seatbelt pretensioner seems like a benign and relatively non-intrusive safety feature. And hey, if it lets you cheat the grim reaper, even if just for now, what's not to like?