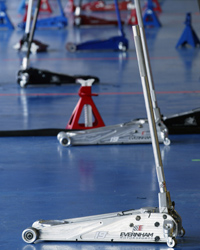 A NASCAR jack is lightweight and powerful.
Darrell Ingham/­Getty Images

­A jack ­is something every driver should carry in his or her car. In fact, most cars come with a factory installed jack in the trunk area. They become an invaluable tool to have around when you have to change a tire. It's the same for the teams competing in NASCAR. Since NASCAR races are so grueling, a race car's tires need to be replaced several times over the course of the event. As you know, you can't replace a tire without a jack.

Since speed is critical in NASCAR, pit crews use a specialized jack that lifts the car with a single pump on the handle. Compare that to the jack you have at home or in your car, which likely requires a lot of pumping or cranking to lift the car. NASCAR jacks use powerful hydraulics to lift the car. Another advantage they have over the jack that you have at home is that they're usually made of aluminum, so they're lightweight and easy to maneuver. One crew member, the jack man, is responsible for operating the jack during a race. He uses it to life one side of the car at a time while two tire-changing teams remove and replace the wheels.

­But what happens if the jack man can't get the jack under the car? Read the next page to find out how the team gets the car in the air.