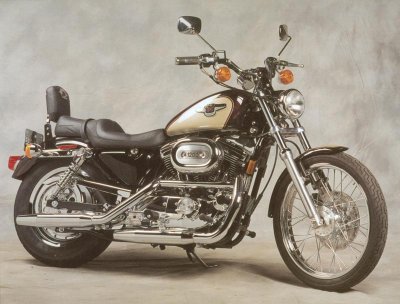 Like other Harleys in the 1998 lineup, the 1998 Harley-Davidson XL-1200C Sportster motorcycle could be ordered with special paint and trim celebrating company's 95th anniversary.

The Sportster's V-twin had remained virtually unchanged until 1986. At that time, it was updated with aluminum heads and cylinders along with hydraulic lifters, improvements that earned it the same "Evolution" title as its Big Twin brothers.

Available only in 1200-cc form for 1998 (an 883 would appear later), the Sportster Custom was among the models that could be ordered with Harley-Davidson's special 95th anniversary trim package that year.

And like all the other anniversary models, it has since become a prized collector's item.

Go to the next page to see more pictures of the 1998 Harley-Davidson XL-1200C Sportster motorcycle. 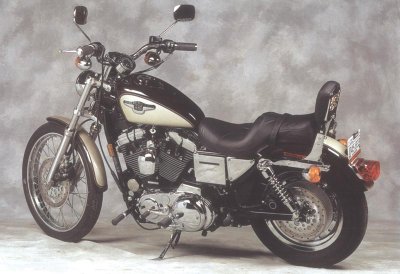 The Sportster is the lighter-weight line in Harley's roster, but hardly less desirable, especially in 95th-anniversary trim.

The 1998 Harley-Davidson XL-1200C Sportster line included a custom model that could be ordered with the company's 95th-anniversary trim. Just 3,000 were ordered that way, raising their value to collectors.

The V-twin gained aluminum heads and cylinders in 1986, when it transitioned to Evolution status.
Tank badging says it all. The Sportster traced its roots to 1957.
Only 3,000 XL Customs sport this engraved plaque. This one identifies this bike as No. 1,409 of the 3,000.
The anniversary logo was nicely stitched into the available passenger backrest.