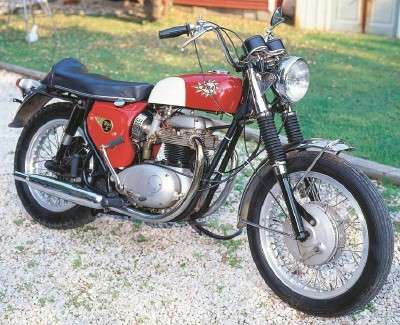 BSA's 650-cc twins were similar in specification, but not in looks, to those offered by Triumph. See more motorcycle pictures.

The 1966 BSA A65 Spitfire motorcycle was one of the survivors when BSA reduced its offerings to six models in 1966. Each of the six had a distinctive profile, and all BSAs were given 12-volt electrics in place of the outdated 6-volt systems.

This change was in response to the fact that, like Triumph, BSA's existence revolved around a selection of vertical-twins. By the mid 1960s, the line was glutted with too many variations of the same equipment.

The A65 Spitfire was positioned as a road racer for the street. To aid performance, two large-bore Amal GP carburetors were fitted, complete with velocity stacks.

As it turned out, these carbs made the Spitfire difficult to start when hot and were often replaced with Amal concentrics with round air filters; in light of this, the factory reverted back to the concentric carburetors in '67.

The small two-gallon fuel tank seen on the example featured here was designed for the U.S. market in response to the popularity of the Harley Sportster's "peanut" gas tank.

The European Spitfire was equipped with a four-gallon tank, and a five-gallon version was available as an option in 1967.

Go to the next page for more pictures of the 1966 BSA A65 Spitfire motorcycle. 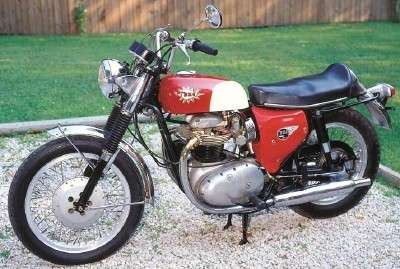 The U.S.-market A65 Spitfire had a two-gallon gas tank.

The 1966 BSA A65 Spitfire motorcycle was positioned as the British company's road racer for the street.

The BSA engine had "teardrop" side covers.
Note that the tachometer (right) lacks a redline.