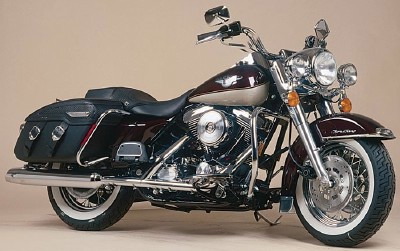 In celebration of Harley-Davidson's 95th anniversary, the company released special editions of its motorcycles with a maroon and gold paint scheme along with special 95th-anniversary emblems. Not all 1998 models received the treatment; the 95th package was listed as a factory option.

Combining classic styling with standard saddlebags and detachable windshield, the Road King's power initially came from the 80-cubic-inch Evolution V-twin, with the new Twin Cam 88 taking its place for 1999.

In 1998, the Road King was offered in two versions: base and Classic. Differentiating the latter were hard bags covered in leather (the base had regular hard bags), whitewall tires, distinct badging, and slanted exhaust tips.

Classics also got standard fuel injection (contributing the "I" in the model designation), which was optional on the base model. Illustrating this article is a Classic dressed in 95th-anniversary attire.

Go to the next page to find more pictures of the 1998 Harley-Davidson FLHRCI Road King Classic motorcycle. 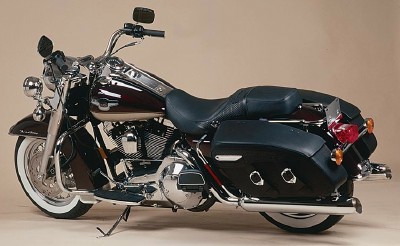 The 1998 Harley-Davidson FLHRCI Road King Classic was offered in two versions: base and Classic.