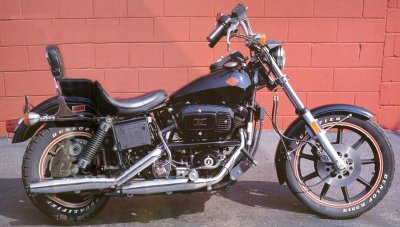 The 1981 Harley-Davidson FXB Sturgis took its name from the week-long motorcycle event held each summer in Sturgis, South Dakota.

The FX designation identified it as a version of the 1978 Harley-Davidson FXS Low Rider; the B indicated that both primary (engine to transmission) and secondary (transmission to rear wheel) drive was via belt rather than conventional chain.

The 1981 Harley-Davidson FXB Sturgis has an all belt-driven drivetrain.

Bathed in black, with only small touches of orange and chrome trim, the Sturgis proved to be a very popular model.