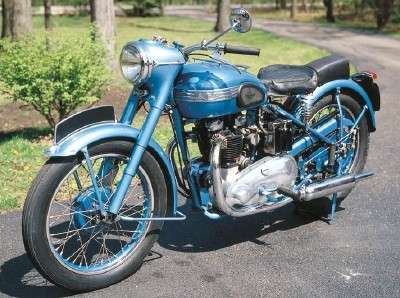 The 1952 Triumph Thunderbird motorcycle was introduced at a time when large, powerful bikes were becoming a fashion Triumph sought to emulate.

Any foreign manufacturer that exports to the U.S. has to listen carefully to the changing demands of the marketplace, and that's just what Triumph did when it released the 6T in 1950.

While the company's offerings were generally well received in postwar America, there was a cry for more power from those accustomed to large-displacement Indians and Harley-Davidsons. And though the 6T's 650-cc engine was barely half the size of the thunderous V-twins of those rivals, it was at least a step in the right direction.

Triumph's popular Speed Twin was the basis for the 6T, and their engines looked the same from the outside.

But it was what was inside that made the difference: Some minor modifications and an extra 150 cc of displacement netted eight more horsepower, raising the total to 34.

New, too, was the styling. A monotone paint scheme bathed frame, tanks, forks, fenders, and even wheel rims in the same color, while new badges and a luggage rack graced the fuel tank.

The headlamp was housed in a streamlined nacelle that tapered into the telescopic front forks, and speedlines were added to fenders, the nacelle, and as part of the badge on the fuel tank.

As was Triumph's custom, the 6T was given a "stage name" in addition to its alphanumeric designation, and Thunderbird became the chosen moniker -- this, of course, years before it was applied to Ford's two-seat sports car.

Go to the next page to see more pictures of the 1952 Triumph Thunderbird motorcycle. 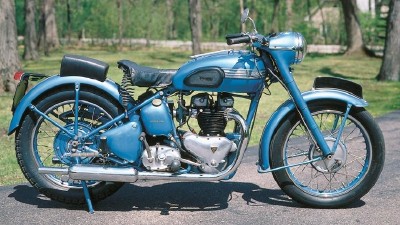 A monotone paint scheme bathed the Thunderbird's frame, tanks, forks, fenders and even wheel rims in the same color.

The 1952 Triumph Thunderbird motorcycle was a response to America's post-World War II interest in powerful motorcycles. The Thunderbird's 650-cc engine was barely half the size of those offered by rivals like Harley-Davidson, but it was at least a step in the right direction.

A Triumph Thunderbird was Marlon Brando's mount in the 1954 film, The Wild One.
The Thunderbird's speedometer went to 120 mph.
An oil tank beneath the seat helps identify this Triumph as housing its engine and transmission in separate cases. Triangular box above foot peg is a tool compartment.
The headlamp was housed in a streamlined nacelle that tapered into telescopic front forks.