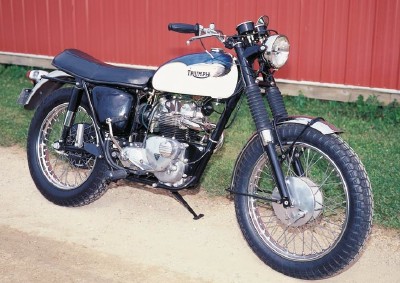 Fun to ride and loaded with personality, Triumph's T100 models were popular into the 1970s. See more motorcycle pictures.

The 1967 Triumph T100C Tiger motorcycle was part of a complete line of small and mid-size motorcycles that Triumph built throughout the 1950s and 1960s. This line was aimed specifically at the first-time rider.

The Tiger 100 was one of the most popular motorcycles in this line and was introduced in 1960 as the T100A. A vertical twin of 500 cc displacement, it wore two-tone paint and "bathtub" tank badges.

In 1966, the Tiger received a thorough makeover. A new frame combined with better forks improved handling and stability. Two-tone paint continued, but tank badges were changed to a new "eyebrow" style.

Offered alongside the T100A touring model was the T100C, an on/off-road bike that sported a smaller fuel tank and headlight, along with high-mounted twin exhaust pipes.

A skidplate was added to protect the underside of the engine during off-road excursions, and an alternator replaced the old Energy Transfer electric system. U.S. versions received alloy fenders in place of the steel units found on their European counterparts.

Go to the next page for more pictures of the 1967 Triumph T100C Tiger motorcycle. 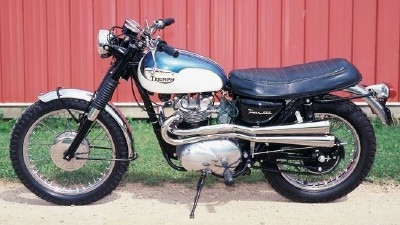 Two-tone paint was a trademark of the Triumph Tiger design.

The 1967 Triumph T100C Tiger motorcycle -- like every other T100C model -- is an on/off-road bike. Aimed at the first-time rider, the 1967 Tiger was equipped with a new frame and better forks than the 1966 model. This improved handling and stability.

Tiger's 500-cc twin looked similar to Triumph's 650-cc engine, though the latter had larger cooling fins on the head and added fins on the rocker covers.
"Eyebrow" tank badges were adopted in 1966 and are seen here on the 1967 model.
As with many other Triumphs of this era, the engine's redline was anyone's guess. The tach, on the left, didn't feature one.
Befitting its off-road capability, the Tiger T100C's dual exhaust pipes were high-mounted.