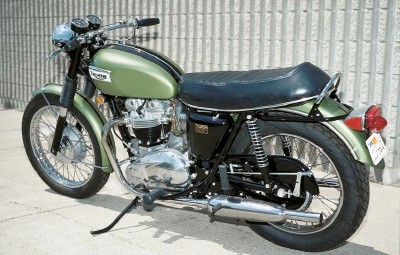 The Triumph Tiger wasn't quite as quick as the British company's Bonneville model, but was considered a better all-around choice for many riders. See more motorcycle pictures.

The 1970 Triumph Tiger 650 motorcycle was manufactured during a pivotal time in Triumph's history.

Throughout the 1960s, England found its economy slipping into a sea of red ink. Many large companies were closing their doors, and unemployment was rampant.

As a method of keeping some of these firms afloat, the government offered infusions of cash, as long as the firm would take on engineers from the bloated military pool.

Although the capital was a welcome relief, engineers that were hired by various motorcycle manufacturers thought like engineers rather than motorcycle enthusiasts, and many of the changes that came about were questionable at best.

Triumph had offered a wide variety of machines throughout its history, but vertical twins, starting with the 500-cc Speed Twin of 1937, quickly became the most popular.

By the 1950s, the engine had grown to 650 cc as found in the Thunderbird, and later in the Bonneville and Tiger models.

Both the Bonneville and Tiger were fitted with the same basic powerplant, but the Tiger had only one carburetor, trading a bit of horsepower for easier starting, better fuel economy, and less fussy operation.

As a result, the Tiger wasn't quite as quick as the Bonneville, but was considered a better all-around choice for many riders.

Bonneville and Tiger grew to 750 cc for the 1973 model year and were soon joined by the three-cylinder Trident. But their days were numbered; the Japanese, with their more advanced machines, were about to take over.

Go to the next page for more pictures of the 1970 Triumph Tiger 650 motorcycle. 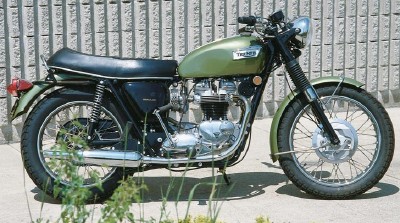 The 1970 Triumph Tiger 650 displays its classic British profile. Japanese motorcycles would soon displace these sorts of bikes in Europe and the U.S.

The 1970 Triumph Tiger 650 motorcycle only had one carburetor, which meant it had less horsepower than its Triumph Bonneville counterpart. However, one carburetor also meant easier starting and better fuel economy, which made the Tiger easier to live with.