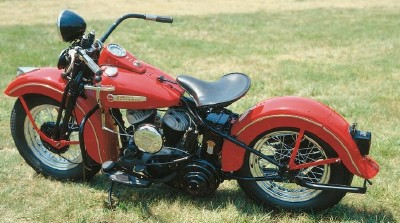 The 1948 Harley-Davidson WL motorcycle, a durable street model that looked very similar to Harley's Big Twin flatheads of the era, was produced through 1951.

Harley-Davidson's first flathead V-twin appeared in 1929 as the Model D. Its 45-cubic-inch engine was smaller than the company's existing 61- and 74-cubic-inch F-head V-twins, which then became known as "Big Twins."

The latter switched to a flathead design the following year, but those larger engines were neither as reliable nor as long-lived as the understressed "Forty-five."

Though the Forty-five was no powerhouse, it proved to be a versatile engine that remained in production for more than four decades.

By 1948, the Forty-five was powering a street model called the WL. It looked very similar to Harley's Big Twin flatheads of the era, the most noticeable visual difference being that WLs had their drive chains on the right side of the bike, while Big Twins had them on the left.

Though 1948 would prove to be the final year for Big Twin flatheads, the WL lasted through 1951, after which it was replaced by the K-series carrying a redesigned 45-cubic-inch flathead V-twin with unit construction (motor and transmission in one case).

Go to the next page to see more 1948 Harley-Davidson WL motorcycle pictures. 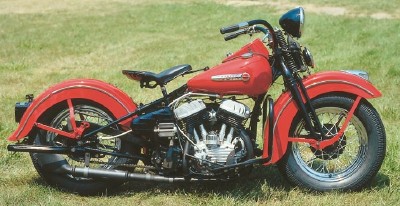 Like its larger stablemates, the 45-cubic-inch 1948 Harley-Davidson WL motorcycle carried a tank-mounted instrument panel. The WL street model also had its drive chains on the right side of the bike, and its hand-shift/foot-clutch arrangement was reversed so that first gear was closest to the rider.

Like the Big Twins, the 45-cubic-inch WL carried a tank-mounted gauge panel.
The WL's first gear was located closest to the rider.
The Forty-Five engine was produced from 1929-1973, and also powered the three-wheeled Servi-Car.
With its broad powerband, the flathead V-twin was