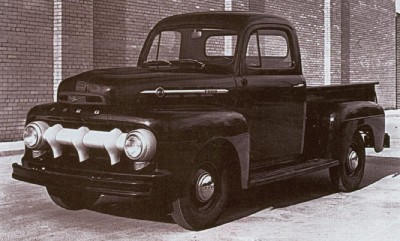 Slight revisions in hood trim marked the 1952s. This is a V-8 model; had it been a six, the engine would have been a new ohv 215-cubic-inch design.

Ford F-Series truck sales were good in 1951, although government-imposed wartime production quotas depressed production somewhat. Total 1/2-ton production slipped to 141,668 vehicles, 117,414 of which were F-1 pickups. The F-2 range accounted for another 20,469 orders and 25,946 F-3s were turned out.

For 1952, appearance changes were confined to minor hood trim revisions and a slight shuffling of color choices. Far more significant was the debut of a new ohv six-cylinder engine. The 215-cubic-inch power plant produced 101 horsepower at 3,500 rpm with a compression ratio of 7:1. Thanks to a compression ratio hike, the 239-cubic-inch V-8 also received a slight power boost from 100 to 106 horsepower; it wouldn't do to have a six produce more horsepower than the Ford V-8.

Though Chevrolet continued to lead the truck market in the 1948-1952 period, the first of the F-Series trucks succeeded in re-establishing Ford as a serious contender in the field. Ford used the high-volume F-1 range as a stepping stone to an even more successful F-100 series beginning in 1953. Though Ford didn't reclaim its industry-leading status until the late Seventies, it laid the groundwork for its eventual success with the Bonus Built trucks.