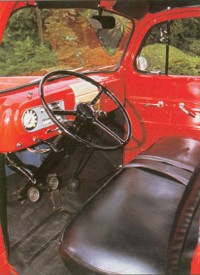 The floor shifter for the three-speed transmission in this 1950 F-1 truck was later changed to a column shift.

The production picture for Ford F-Series trucks changed drastically for the better across the auto industry in 1950. Frankly, credit has to go to the outbreak of the Korean War that June. Consumers who feared World War II-style limits on car and truck production hurried to buy while vehicles were still available. At Ford, total truck production jumped by more than 100,000 units to 345,801. F-1 production alone came to 179,693 trucks, headed by 148,956 pickups and 22,421 panels. Of the 25,571 F-2s and 29,028 F-3s made, the vast majority were pickups.

The only changes of note were slight engine modifications (that did not affect displacement or horsepower), a late-model-year switch to a steering-column-mounted gearshift lever for three-speed F-1s, and three new body paint colors: Sheridan Blue, Palisade Green, and Silvertone Gray. Also, the use of four-wheel drive in light trucks broadened in May 1950 when Marmon-Herrington announced the Ranger.

Windows were cut into an F-1 panel body and rear seats were added to create a seven-passenger vehicle similar to the Chevrolet/GMC Carryall Suburban. Underneath, M-H replaced the stock Ford drivetrain with its own 4 x 4 running gear. Marmon-Herrington and Coleman were the main aftermarket converters of Ford vehicles to four-wheel drive in the years before factory-offered systems became available.

A substantial facelift and new features finally arrived for 1951. The most obvious change was a restyled grille. A massive grille opening extended to the edges of both front fenders. A single horizontal bar, supported by three bullet-shaped grille teeth, spanned the grille opening, terminating at each headlight. Front fenders were also restyled to accommodate the wider grille, and the large nostril vents formerly found on the front of the hood were replaced by a three-element opening. The hood side vent style was redone, too. A new ribbed front bumper curved around to better protect the revised front sheetmetal. Paint colors included Raven Black, Silvertone Gray, Sheridan Blue, Alpine Blue, Meadow Green, Vermilion, and Sea Island Green.

Detail improvements were made to both engines. Also new was a vacuum spark advance system called Power Pilot, which metered fuel and adjusted spark according to load conditions. Although simple in comparison to the electronic spark and fuel metering systems of today, Power Pilot was an early attempt to increase fuel economy based on the intake manifold's vacuum reading. F-2 and F-3 models gained improved brakes.

Continue to the next page to learn about Ford's 1952 F-Series trucks.