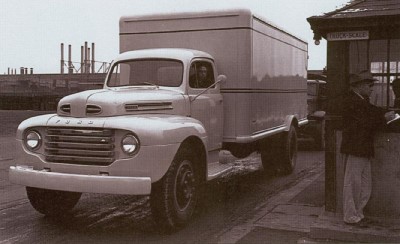 A 1948 Ford F-6 wears an aftermarket cube body on its two-ton chassis.

The 1948-1949 Ford F-Series trucks came in eight standard paint colors: Barcelona Blue, Medium Luster Black, Feather Gray, Glade Green, Monsoon Maroon, Rotunda Gray, Vermilion, and Tucson Tan. Wheels were painted black, as were the bumpers and running boards (except on panels, which had body-color running boards). The recessed area around the grille on early 1948s was painted tan; late 1948 production used argent paint. Also, the grille bars were chrome covered up to mid-July, after which they were argent with red pinstriping.

Two L-head engines were available for the new light duty trucks. The 7H version of Ford's 226-cubic-inch six adopted for 1947 passenger cars spread to the 1948 truck line. It was rated at 95 horsepower at 3300 rpm. For an additional charge, truck buyers could opt for the 239-cube V-8 that made 100 horsepower at 3,800 rpm. A three-speed transmission with a floor shift was standard in the F-1, with heavy duty three-and four-speeds available as extra cost options. F-2s and F-3s came with the four-speed standard.

The black wheels of this truck are usually associated with 1948 F-1s.

With attention at Ford shifted to the company's first new postwar car lines, there were no major changes for the 1949 trucks. The easiest ways to distinguish a 1949 F-Series from a 1948 are its body-color wheels (on F-1s) and the elimination of the red striping on the grille bars. All body colors carried over.