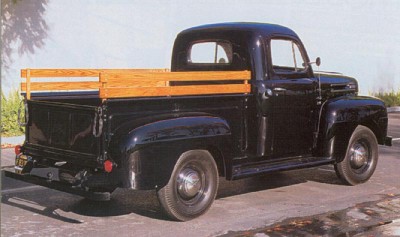 A 61/2-foot all-steel pickup bed with a reinforced tailgate was fitted to the 1/2-ton Ford F-1.

From this point on, our focus will be on Ford F-Series light duty trucks up through the F-3s. These were the high-volume models, serving the broadest range of needs experienced by farmers, tradesmen, and merchants. It is their successors that sit atop the U.S. sales charts today.

F-Series trucks began rolling off the lines at the Highland Park, Michigan, and Richmond, California, assembly plants on November 27, 1947. The public got its first look at them on January 16, 1948. As a means of planting the idea in consumers' minds that Ford trucks represented excellent value, advertising and promotional pieces referred to them as "Bonus Built." In other words, buying a new Ford gave the buyer even more value for his money than he was due.

What feature of a new truck is the most important to prospective buyers? For most it's the cab interior, considering this is where the driver spends his time. Ford planners agreed and designed what was called the "Million Dollar Cab" to deliver "Living-Room" comfort. This line reflected the actual $1 million Ford spent on design and tooling for the new cab, which was more spacious than the one it replaced. Roof height was taller to accommodate the majority of truck owners who, as was the custom in those days, wore hats.

The cab was a full seven inches wider, giving seating room for the driver and two passengers. The doors were moved three inches forward, increasing the distance between the cowl pillar and the seat riser for easier entry. New cab mounting techniques were intended to cut down on noise and vibration. Interior appointments were also more luxurious, including full interior trim, handsome upholstery, sun visors, an ashtray, and easy-to-read instruments.

Styling was dominated by fulsome fenders that began just ahead of each door and wrapped around the front, giving the visual impression of being a single piece. Larger, squarer rear fenders on pickups complimented the front units, right down to a full-length crease that passed just above each wheel opening. Panel deliveries had a version of this same fender shape stamped into their bodysides.

The grille -- now composed of five thick horizontal bars in place of the vertical members on 1942-1947 models -- and headlights resided in a recessed panel on the face of each vehicle. The ledge above the grille held chrome block letters that spelled out "FORD" and above this sat a large alligator-style hood with bright-trimmed "nostrils." Cabs featured a wide, single-plane windshield and new vent windows in the doors.

Wheelbases of light duty trucks were unchanged from the immediate past. F-1s rode a 114-inch stretch. The F-2 was Ford's first 3/4-ton model since 1942, but it shared the 122-inch chassis with the F-3, which was the successor to the former Tonner. (Though it technically had a higher GVW than its predecessor, the F-3 was nominally downrated to 3/4-ton in order to leave the one-ton range to the F-4, itself a downrated version of the former 134-inch-chassis 11/2-ton truck.)

The F-1's pickup box measured 61/2 feet long. It boasted an all-steel floor with pressed-in skid strips plus the industry's only hardwood subfloor. Also standard were a reinforced tailgate, rolled flare boards with stake pockets, and 45 cubic feet of load space. F-2 and F-3 pickups trailed eight-foot-long cargo boxes. The F-1 panel truck's new body was an eight-footer, too, a gain of half a foot from the 1947 model. It offered 160.3 cubic feet of cargo space.

On the next page, learn about features and prices for 1948 and 1949 Ford F-Series trucks.