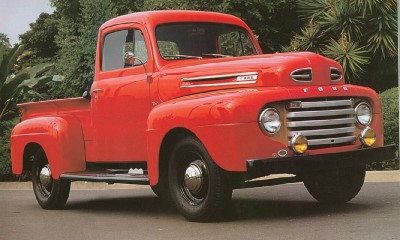 The Ford F-Series truck has become a staple of the American road, enjoying unprecedented success in the Eighties and Nineties. Its long trip to the top of the sales charts can be traced to Ford's first new vehicles to come out after World War II.

Ford Motor Company celebrated the 50th anniversary of its F-Series trucks in 1998. The company was quite willing to advertise its modern product amid images of its predecessors, and the attention Ford lavished on its light duty models during the year certainly was warranted. Of course, looks and engineering changed with the times, and model numbering was toyed with over the years, but perhaps no aspect of the F-Series's evolution has been as remarkable as its acceptance. For the better part of two decades now, the Ford truck has been the best-selling vehicle of any kind in America and the emblem of the truck mania that has swept through the U.S. auto market. Was there a single soul who could have imagined such a thing in 1948?

There is more to the story of Ford's 1948-1952 F-model trucks than a mere accounting of styling, specifications, models, and features can show (though these issues are important and will be examined in depth). Before jumping into the product side of the story, it helps to survey the bigger picture.

Beginning in 1917, Ford was the truck industry's hands-down production leader in light duty and medium duty models. Chevrolet pushed Ford out of its coveted number one truck sales position in the mid-Thirties and was still comfortably in first place in truck sales for 1948, when our story begins.

In 1948, Ford was a remade company in a remade country. The Great Depression and World War II were history. In the wake of devastation across Europe and Asia, the United States was the world's unchallenged superpower. Henry Ford II had come into the Ford Motor Company in 1943 and was named president in September 1945. To his credit, "HFII" had the foresight to hire the so-called "Whiz Kids," a group of 10 former military management brains, to overhaul the internal workings of the company. His second brilliant move was to bring in Ernie Breech from GM-owned Bendix as executive vice president and general manager of Ford.

Headed by HFII, Ford's new managers were ambitious to say the least. They were determined to return to the glory days when Ford led the industry in both auto and truck production. However, this was a team of realists who knew they couldn't reach their lofty goals overnight. They buckled down, worked diligently and intelligently, and played catch-up one year at a time.

After World War II ended, the Big Three manufacturers inaugurated new truck designs before turning out their first all-new cars. Trucks came first because post-war truck building got off to a running start and the truck business turned from a seller's market to a buyer's market earlier than did the car business. Detroit's plants built military and civilian trucks continuously throughout the war.

An article in the October 1945 issue of Power Wagon magazine tallied it all up: "Rationing of commercial motor vehicles was put into effect on March 9, 1942. From that time to July 31, 1945, the ODT (Office of Defense Transportation) released 401,118 trucks, trailers and bus chassis for civilian use. ... " Of that number, 56,128 were light trucks. Chevrolet and GMC got the jump, introducing their new models during mid-1947. Dodge and Ford, meanwhile, pointed to the start of the 1948 model year to release their modernized trucks.

Keep reading to learn about the early days of Ford's F-Series truck program.