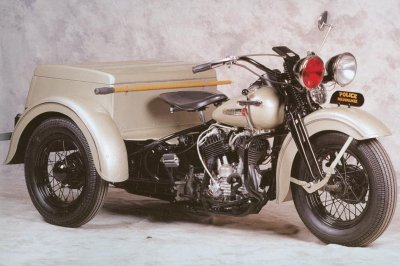 The 1947 Harley-Davidson Servi-Car was designed for use by mechanics. See more motorcycle pictures.

The 1947 Harley-Davidson Servi-Car, likes it predecessors, was intended for use by auto repair shops to make house calls.

If the mechanic couldn't make the necessary repairs with the tools stored in the Servi-Car's cargo box, he could hitch his mount to the rear bumper of the car with a tow bar, and (assuming the car was driveable), take the two of them back to the garage. Likewise, it could also be used to deliver the car when the work was completed.

The storage box was large enough to contain a mechanic's full repair kit.

Over the years, Servi-Cars have been used for all sorts of chores, one of the more common being for parking enforcement. Our featured example was purchased by the Milwaukee Police Department for just that purpose. Note the chalk stick attached to the box behind the seat. Since cars were parked on the right (and therefore the officer would be wielding the stick in his right hand), the throttle is on the left. That necessitated moving the shifter to the right, so this vehicle is set up just the opposite of most.

Harley-Davidson Servi-Cars were often used by police departments to help with parking enforcement.

Servi-Cars were powered by the 45-cubic-inch flathead V-twin and normally fitted with a three-speed transmission with reverse.

The Harley-Davidson Servi-Car remained in production until 1973.

The '64 model was the first Harley with electric starting. They remained in production through 1973, carrying the old 45 flathead to the end.

The oil and gas caps sat to either side of the speedometer.