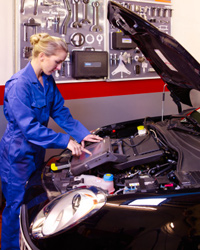 Modern cars have everything regulated by an on-board computer called an engine control unit, or ECU.
Peter Dazeley/Getty Images

An engine is an incredibly sophisticated device. It has dozens of moving parts and has scores of different processes taking place at once. That's why modern cars have everything regulated by an on-board computer called an engine control unit, or ECU.

The ECU makes sure processes like ignition timing, the air/fuel mixture, fuel injection, idle speed, and others operate the way they're supposed to. It monitors what's going on in the engine using an array of sensors and performs millions of calculations each second in order to keep everything operating correctly. Other computers in the car control things like electrical systems, airbags, interior temperature, traction control, anti-lock brakes and the automatic transmission.

Cars have become increasingly computerized since the first on-board diagnostic (OBD) computers were added in the 1980s. That's the computer that's responsible for the "check engine" light on your dashboard. A mechanic can plug a computer into the OBD port and get a sense of your car's problem areas. They can't use OBD to immediately know what's wrong with your car, but it gives them a great starting point.

By making the engine run more efficiently, engine computers can result in greater fuel efficiency and easier diagnosis of problems. But they also make engines far more complicated, and can make them tricky for weekend mechanics to work on.

Next up: Let's learn why diesel engines aren't the smoky, noisy, low-power oil burners of the past.