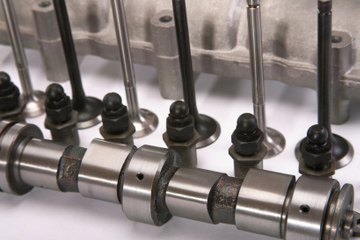 Car Engine Image Gallery It's important for both fuel economy and the longevity of your engine to have your oil changed at regular intervals. See more car engine pictures.
© iStockphoto.com/Sergiy Goruppa

Everyone knows it's important to have your car's oil changed regularly. But what exactly does engine oil do?

The modern internal combustion engine has dozens of moving parts. Those parts can rub against each other, creating tremendous heat friction that can damage the engine.

Oil could be considered the "blood" of your engine. It keeps all the engine's moving metal parts properly lubricated, and prevents them from grinding together and being damaged by friction. Friction results in heat generated by two surfaces moving against each other. And too much friction can cause damage to either surface.

Internal combustion engines are notoriously inefficient. Only about 20 percent of the energy from the fuel is used to actually move the car. Friction is one of the factors that further reduce that already low efficiency.

As with any mechanical device, energy is lost due to friction. And when your engine is running on old or too little more oil, it can't lubricate things properly, causing more friction than normal. With your engine running less efficiently, you'll see a decline in gas mileage -- in other words, it now takes more fuel than usual to accomplish the same task.

That's why it's important for both fuel economy and the longevity of your engine to have your oil changed at regular intervals, usually every few months or 3,000 to 5,000 miles (4,828 to 8,047 kilometers).

You can even boost your car's gas mileage by about 5 percent or more by using more advanced motor oil. This includes regular oil with additives, or synthetic motor oil, which is created in a lab and not from petroleum-based crude oil. (Read your owner's manual -- some cars require synthetic oil.)

One researcher has devised a way to reduce engine friction by more than half. Dr. Guojun Liu, a Chemistry professor at Queen's University, used nanotechnology to develop motor oils with polymer particles that can cut friction by 55 percent. Just imagine how much more efficient engines would be if they used such an oil -- and the better gas mileage that would result!

For more information about engine friction, gas mileage and other related topics, follow the links on the next page.