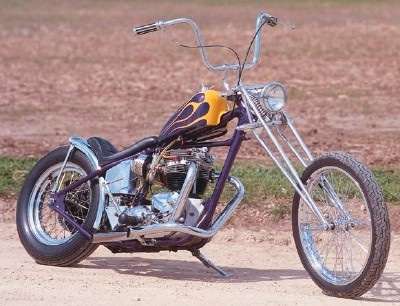 The Outlaw was once a 1970s Triumph Bonneville. See more motorcycle pictures.

Originally built in the 1970s, this Triumph Bonneville chopper was left for dead before being located by the current owner. Once acquired, the machine was treated to a complete restoration and renamed Outlaw.

Changes to the original 650-cc (40-cubic-inch) vertical-twin engine were limited to the addition of a "drag-pipe" exhaust. The forward part of the frame is stock, but the swingarm and shocks were removed and replaced by steel tubing, converting it to a hardtail. Girder forks were fitted in place of the original telescopics. A 16-inch spoke wheel with drum brake holds up the rear, while the 21-inch spoke in front has no brake at all.

Part of the restoration included a fresh coat of purple paint with classic yellow flames. The scheme is similar to what was originally applied in the 1970s, making this chopper a bit of history brought back to life.

Go to the next page for more photos and details of this Triumph-powered chopper, the Outlaw.For more information on custom choppers and motorcycles, see: 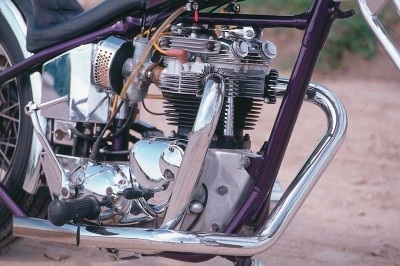 The Outlaw is a custom Triumph motorcycle built by Matthew Thomas. Below are more pictures and details of this powerful chopper.

The two-cylinder Triumph engine was known as the Classic British twin, and many powered choppers of the 1970s. This example is fitted with a "drag pipe" exhaust.

The Outlaw's paint job recalls the chopper's past.

Flamed paint job mimics that originally applied to this chopper in the '70s. Note the "spired" gas cap, another throwback to its origins.

The chromed rear fender of the Outlaw.

Most Triumphs of the '60s came with a chromed rear fender, and that theme is echoed here -- though the original was much longer.