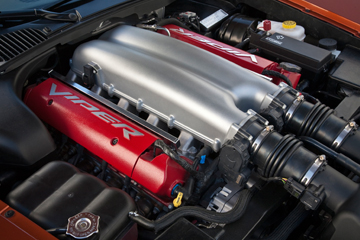 Engine mounts act like small cushions that absorb any movement between the engine and the car's frame. Stiffer, high-performance engine mounts can actually improve engine response in some cars and trucks.
(Courtesy of Chrysler Group LLC)

The question itself implies that there's some great secret to be extracted from simple hardware pieces. Motor mounts are simply brackets, mostly metal, that attach to the engine on one end and the car's engine bay on the other. They're designed to keep the engine in place. Though motor mounts vary greatly in appearance to accommodate different engine layouts, they're all similar in structure. They're usually steel or another hard metal with plastic or rubber cushioning. If it's really easy to improve motor mounts, you might ask, why don't auto manufacturers do this themselves? It's a reasonable question. The truth is, motor mounts are designed to appeal to the broadest part of the population -- that is, people who don't want to think about them. People who want the engine's vibrations and jiggling around to be minimized as much as possible so they don't have to hear it, feel it, or worry about it. Let's face it, that's most people -- this assertion's backed up by the fact that most cars sold are of the non-performance variety. And in that respect, factory engine mounts do their job quite well. But to do that, they have to be quite soft, like small cushions absorbing the impact between the engine and the car's frame, so the people in the cabin can barely feel what's going on up front.

The result of this is what performance tuning companies call drive line lash [source: Anthony Woodford Racing]. This means that when you hit the gas to accelerate and the engine produces the torque it needs to move forward, some of that torque is lost. The soft engine mounts absorb it as the engine shifts around, because that additional movement would cause uncomfortable sensations in the car's cabin. But if that wasted torque could instead bypass the cushions and move down the drivetrain to the wheels, it would result in the car putting more power directly to the ground. For some drivers, that increase in power is worth sacrificing a little comfort.

The engine still needs motor mounts, of course -- and so, there's no way to completely eliminate drive line lash. The points of contact between the engine and the car do require some protection; however, eager drivers have the option of upgrading to performance motor mounts. They're made of stiffer material than the factory original rubber parts -- usually a hard urethane material that absorbs less vibration and therefore, absorbs less power, too. Upgrading might be an especially attractive option after the stock parts wear out. Factory original mounts last a pretty long time, but engine oil leaks are a common cause of premature degrading. Worn mounts will allow a running engine to shift and bounce in all kinds of unpredictable, power-sapping ways.

There's no way to determine how performance motor mounts will affect the comfort of your ride. Some sport tuning companies offer their mounts in different levels, from a barely-noticeable change to a much firmer and harsher experience that might be best left for a weekend track toy. And, of course, the end result and cost also depend on the specific make and model of car. Since you have to remove the car's engine (in some cases), upgrading motor mounts can be a challenging project to tackle in the garage, and one that requires a lot of specialized equipment, too [source: Popular Mechanics]. A good aftermarket tuning shop, however, will be able to answer your comfort concerns before you get started.

People have used hockey pucks as motor mounts. It's true. I've seen it. It's not really recommended, but about 10 years or so ago, when I was regularly hanging out with a group of guys who performed engine swaps, it was considered an inexpensive way to get a high-performance mount. Metal brackets were not considered necessary.

Hockey pucks are made of hard rubber that's very similar to an engine mount. I'm not recommending it, and HowStuffWorks.com certainly is not recommending it. But it was the first time I'd considered the concept of "performance" engine mounts. And I guess the highest-end polyurethane mounts available at the time just weren't good enough. Or perhaps they were too expensive. In fact, there were plenty of things in our world that were too expensive at that time ... like any car less than 15 years old. The boys bought hockey pucks in bulk. I didn't. My car rattled enough as it was.

Classic Chevy Engines
What does the VTEC system in a Honda engine do?
How Diesel Engines Work