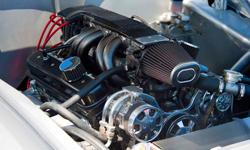 There are lots of reasons a car or truck can shake and rattle while it's on a roll.
Brian Stablyk/Photographer's Choice RF/Getty Images

In 1990, a fledgling offshoot brand of Japanese automaker Toyota Motor Co. found itself eager to make an impression among buyers who equated ultimate luxury with European brands. The upstart, Lexus, aired a commercial in which a pyramid of 15 champagne flutes balanced on the hood of a Lexus LS 400. With the car on a treadmill going the equivalent of more than 140 miles per hour (225.3 kilometers per hour), engine revving, the glasses remained motionless on the hood -- proof, presumably, of the new luxury manufacturer's precision detail and the silky smoothness of its cars [source: Dawson].

It was proved, by the way, that the stunt in the commercial was indeed authentic. But did the stunt itself prove anything?

If the rapid increase in Lexus's brand recognition was any indicator, it showed that premium car buyers placed significant importance on quality measurements such as engine vibration. Specifically, the less of it, the better: As anyone who's endured the racket inside an econobox knows, engine vibrations that reach the cabin can severely hamper ride quality.

Engine vibration is but one of several quality factors that automotive engineers refer to as Noise, Vibration and Harshness, or simply NVH. It's important to focus upon because NVH determines, in large part, what consumers think and feel about a vehicle; in turn, that affects how much they're willing to pay for it and if they're even willing to buy it at all.

Of all the reasons a vehicle can shake and rattle while it's on a roll, engine vibration deserves special scrutiny because it can have an impact on:

So let's take a look at five innovations from past, present and future that can reduce engine vibrations, increase comfort and make for a better overall driving experience.

In a sense, engine mounts are the first line of defense in suppressing engine shakes from propagating throughout the entire vehicle.

First, we should probably talk about why engines produce vibrations in the first place. Recall that the internal combustion process is a series of explosions. They're finely controlled and choreographed, but they are forceful explosions, nonetheless. Second, internal combustion engines are a hodgepodge of pumping, whirring and rotating parts. Those parts have mass, and when put in motion, they react against the engine block with equal and opposite force. Those reactions, multiplied by thousands per minute inside a typical engine, manifest themselves as vibrations.

So, some amount of engine vibration is perfectly natural -- it's just that we don't want to feel it inside the passenger compartment. Engine mounts are typically metal flanges on the engine and along the walls of the engine bay. They're lined with thick grommets or blocks made of polyurethane or rubber to absorb some of the vibration energy from the engine when it's running.

If you start to notice excessive vibration from the engine where there was none before (and you know it isn't something else, like a misaligned suspension), a good place to check is the engine mounts. Worn engine mounts may be obvious -- often the rubber or other absorbing material will be cracked, torn, or visibly worn. Sometimes you can't tell just by a visual inspection, as the rubber may have collapsed internally. If you're not sure, see a qualified technician [source: Denby].

In addition to the engine mounts, it's a good idea to check the transmission mounts as well -- they serve the same purpose, to insulate the rest of the vehicle from heavy-duty shaking caused by the transmission.

When you call a person "stiff," it's generally not considered a compliment. But when applied to vehicles, stiffness is a good thing.

When it comes to keeping engine vibrations in check, it pays to start with a solid foundation. And by that, we mean the frame -- the skeleton, if you will, of any road vehicle. A solidly built, structurally rigid frame resists flexing, bending, and transmitting annoying vibrations.

Squeaks, rattles and buzzes often come from a loosely assembled frame and are made worse by wide tolerances on a car's overall construction. In the auto business, this is sometimes referred to as "fit and finish." That's a broad term that essentially means, "How much attention to quality and precision did the builders devote in the assembly of this vehicle?"

A poor fit and finish, coupled with a loosely welded and flexing frame, can make any existing engine vibration sound and feel worse.

Sometimes, to hunt down and eliminate engine vibration you have to go straight to the source. Our next engine vibration fighter is sure to spark some recognition among experienced wrench turners.

The Anatomy of Engine Vibration

NVH typically comes in two varieties: airborne, which you perceive through your ears; and structural, which you mostly feel -- through the vehicle's seat, steering wheel and floor pan. Airborne disturbances are generally higher frequency sounds in the 300 Hz and above range. Engineers counteract them either by eliminating them at the source or deadening them with sound-dampening material (inserted in door and body cavities). Structural disturbances take place at such low frequencies that they are felt (as vibration) more than heard. Auto engineers must painstakingly measure and try to mitigate unpleasant sensations drivers experience, as vibration energy gets transmitted to motorists' hands, feet and even the seats of their pants! [source: Duncan, Su and Wolf]

Misfiring is yet another culprit behind engine vibration. Modern ignition and fuel injection systems, which include better spark plugs and intelligent engine management computers, are far more reliable than the distributor-based systems of yesteryear.

That said, misfiring can (and does) still happen on newer vehicles. During a misfire, one or more spark plugs fail to fire and ignite a fuel pulse when they're programmed to. That failure to fire in one or more combustion chambers causes a hiccup in the rhythm of the pistons, and as a result, the crankshaft to which they're attached. The result: vibration, jerking, and even engine stalling. Now for the innovative part: if you can't tell the spasmodic vibrations of a sick engine from a merely old and pokey one, today's technology has you covered. It's almost certain that a misfiring or non-firing cylinder-spark plug combo will trigger a "check engine" light on any modern car. From there, you can use an easy-to-find and purchase diagnostic reader to determine what's wrong, or bring the vehicle to your local service shop to have a technician take a look.

At its heart, unwanted engine vibration is about a lack of harmony. As we already noted, internal combustion is a pretty violent process to begin with. Our next innovation is one pioneering man's attempt to bring some harmony into the equation.

If you've ever seen an automobile crankshaft up-close and personal, you know that it's a big, heavy, and extremely tough piece of equipment. It has to be, in order to withstand the pounding it takes from the thousands of explosive piston strokes it receives per minute.

Tough as it is, a crankshaft is prone to twisting and flexing in reaction to the drubbing it takes from the pistons and connecting rods above it. It can also transmit unwanted vibration throughout the engine and rest of the vehicle. Furthermore, at a certain RPM, the crankshaft can reach a state called resonance, where it vibrates at a frequency that can cause catastrophic failure (think of the television commercials you've seen where a resonant singer or high-pitched sound is used to shatter an unlucky wine glass).

In 1911, automotive genius Frederick Lanchester invented a device to bolt onto the end of spinning crankshafts to eliminate, or at least reduce these problems. The harmonic balancer (which goes by names including vibration damper/dampener, or crankshaft pulley) was born. This balancer dampens the shearing, twisting forces imparted on the crankshaft by the pushing of the pistons. To absorb the tremendous energy of the crankshaft, the balancer has a section that can be made of rubber or filled with an energy-dissipating fluid [source: Hillier].

So far, we've looked at lots of ways to passively prevent, or at least muffle, those annoying engine vibrations. But our last anti-vibration innovation actually goes on the attack to keep those bad vibes at bay.

Shaving Weight and Risking the Shakes

Harmonic balancers are heavy by necessity, in order to counter the considerable rotating mass of a crankshaft. But in the high-performance world of car customizing, weight eats into horsepower. As a result, many speed enthusiasts replace the harmonic balancers on their cars with lighter, aftermarket versions or remove the units altogether in order to go a little faster. The trade-off: they get a harsher, shakier ride and potentially cut short the life of their car's engine. 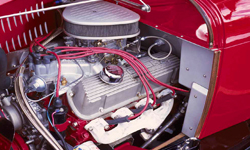 If you've ever flipped through a catalog for one of those expensive gadget stores, chances are you've encountered a spread advertising noise-canceling headphones. If so, you may remember that they work by detecting offensive noises with a microphone, duplicating the sound in almost every way, and piping it back into your ears. The only difference: the duplicated sound is purposely shifted 180 degrees out of phase from the original noise.

While the dueling sounds are of the same frequency and amplitude, the phase shift causes them to cancel each other out. To you, the listener, the original noise is rendered a barely audible whisper of its former self, allowing you to enjoy your music, or if you prefer, sweet silence.

That's pretty much the way active vibration control, which can be used in automobiles, works as well. In one system, from a company called Trelleborg Automotive, a microphone mounted in the car listens for vibrations within a pre-determined frequency range. Similar to the headphones example, the system responds with an equal but opposite counter-vibration. An electromagnetic actuator, called a "shaker," transmits the counter vibrations at select mounting points, for example, the steering wheel or the foot well of the floor pan.

Of course, a possible drawback of such a system is that it might work too well, and mask some of the symptoms of a truly ailing automobile. But, as mentioned earlier, chances are good that you'd get some other type of warning, such as a check engine light, to signal legitimate trouble.

As you just read, engine vibrations can be felt in the cockpit for lots of reasons. Lucky for us, the preceding innovations offer effective ways to battle unwanted engine clatter, rattles and rumbles.