What does a harmonic balancer do? 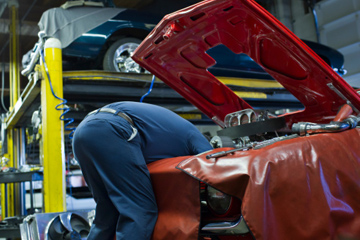 A harmonic balancer sounds like a crucial part on a spaceship in some pulpy 1950s sci-fi story, or something you need so you can play music with hobos when you're ridin' the rails. However, it's actually an important part on your engine that helps your crankshaft last as long as possible.

As the cylinders in your engine fire, they move up and down, generating torque that's transferred into the crankshaft. As you may already know, the crankshaft is what converts the engine's power into rotational movement, eventually turning the wheels of the car.

But consider for a second the forces that are acting on the crankshaft -- they're tremendous. Each time a cylinder fires, a force acts upon the crankshaft, causing it to twist. But this force also causes vibrations in the crankshaft, and at certain frequencies, the shaft can resonate, which makes the vibrations even worse [source: Mach V].

These vibrations from the engine can become too much for the crankshaft to bear, causing it to fail. And when that happens, your car won't run and you'll be facing some expensive repairs.

This is where the harmonic balancer comes in. The circular device, made of rubber and metal, is bolted at the front end of the crankshaft to help absorb vibrations. It's usually connected to the crank pulley, which drives accessories like the air conditioner. The rubber inside the pulley is what actually absorbs the vibrations and keeps them at a safe level. In essence, the device is designed to help prevent crankshaft failure. It's also sometimes called a "dampener."

However, the rubber material can deteriorate over time. So if your harmonic balancer is going bad, you could get rough engine vibrations, a cracked crankshaft, or even a serpentine belt that gets thrown off its track. Replacing one is excellent preventative maintenance, and that's exactly what we'll talk about next.

So you want to replace your harmonic balancer, huh? There's good news and bad news. First, the good news: Installing a new balancer is a relatively easy task. And now the bad news: Getting the old one off the crankshaft is not. It could involve taking apart some of your car's body parts, like the front fender or bumper and probably even the radiator.

First, you'll probably need to go out and buy a tool you might not have -- a harmonic balancer puller. That's a specialized tool that's used to safely remove harmonic balancers without damaging your vehicle, and it also works on things like gear pulleys and steering wheels. Search around to find the right puller for your needs. They're usually around $25 or so.

Every engine is different, so if you want to change the harmonic balancer on your car, you'll need to search around various car forums and Web sites to see how it's done on your specific model. Generally, you'll want to remove the belt from the crankshaft pulley and then take the harmonic balancer mounting bolt off with a socket and ratchet. From there, you'll use the puller tool you just bought to take the balancer itself off the crankshaft [source: Auto MD].

As far as reinstalling the new harmonic balancer goes, it's pretty much the same steps in reverse. Just be sure to compare the old part and the new part to make sure the bolt hole locations are the same. And don't forget to pay close attention to the proper torque settings, too. If you can start your engine and the vibrations don't jar your tooth fillings loose, you've done the job correctly.

I'll admit that I had no idea this part even existed until I began researching this article. It's just further proof of the complexity of the modern engine and its supporting components. I've read that a lot of people remove the harmonic balancer because they think it will increase their vehicle's performance, but I don't think this is recommended.