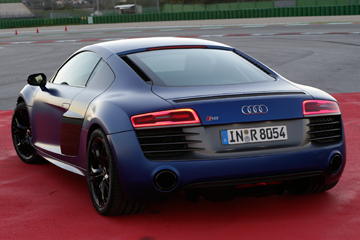 The mid-engine, all-wheel-drive, 2014 Audi R8 V-10 plus -- a supercar that simply begs to be driven fast.
(Courtesy of Audi of America)

There are so many good reasons to design a car with an engine in the front, which is probably why it's the simplest and most common layout. But when complexity is an asset -- such as in high-performance cars -- auto engineers do have other options. Engine placement tends to correspond to how the rest of the car is configured -- specifically, which wheels drive the car. (This connection is strong, but not completely foolproof -- 4-wheel-drive and all-wheel-drive cars are notable and fairly common exceptions). It's such an intensely debated topic that Car and Driver conducted an intense analysis, using one rear-engined and one mid-engined Porsche for comparison. Even if a Porsche isn't in the budget, a lot of the principles are the same. So, let's take a look at some of the characteristics of each layout. There's a lot of physics and engineering involved in these designs, but we'll try to keep it as simple as possible.

Front-mounted engines are the most common engine placement. Consequently, front-wheel-drive cars are also the most common. They're practical -- a front engine bay is easiest to work on, and a front-mounted engine allows for roomier cabins and more passenger space. And while a front-engine vehicle can be tuned for some spirited driving, front-engine cars are at such an engineering disadvantage from a performance perspective that many high-performance auto manufacturers reserve them for their low-end models or skip them altogether. Why? The simplest explanation is that rear-wheel-drive cars handle the best from a performance perspective, and a ton of power would be wasted if a front-mounted engine had to send its output down the entire length of the car to turn the rear wheels. Front-engine cars also lose a bit of braking capacity because the car's weight shifts forward as the car decelerates, giving it extra momentum in the unwanted direction.

A rear-mounted engine basically means that the engine is located in what we think of as the trunk area. It's a popular design for sports cars because placing the power source behind the rear axle increases acceleration and braking ability. The acceleration might seem counterintuitive -- after all, the car essentially needs a big push from behind to get going, and that's right where all the weight is based. But that weight also bears down on the rear wheels, which improves the tires' traction. And simply due to the nature of the design, rear-engine cars tend to be considerably smaller than an average passenger vehicle. That size advantage will improve handling as well. However, there's one specific handling drawback -- rear-wheel-drive cars are prone to a type of skidding known as oversteer. Oversteer is when the rear end of the car slides out of line of the front, causing a fishtailing effect. Oversteer can be tricky to control, especially in inclement weather, but plenty of weekend track warriors appear to enjoy the effect.

Mid-engine cars are the least common configuration of the three, but they feature the engine in "the optimum location," according to the aforementioned Car and Driver article -- just in front of the rear axle. That's because, in addition to a mid-mounted engine's proximity to the rear wheels, this design also allows the car to achieve ideal weight distribution, center of gravity and traction. When the car's weight is centered, the wheels won't be thrown off balance by having to cope with extra weight, and the car can be steered with more precision. These are factors the average driver probably never thinks about, but can make a world of difference powering through tight turns on a track.

There's a lot of talk about how engine placement affects handling ... a lot. It's a favorite topic among enthusiasts of high-end brands. And I've driven all the configurations -- maybe not extensively, but enough to have a handle on the difference. If you want to put it in its simplest terms, it's the experience of being pulled, as opposed to the experience of being pushed. In both scenarios, the driver is totally in control, but there are subtle differences that are hard to put into words. Driving a car with a front-mounted engine (which is most of 'em, by the way) feels like the engine knows its purpose -- it's doing its job to pull your vehicle along. A rear-mount seems like it's out for a cruise, so powerful that it doesn't even notice it's pushing you along. Center-mounted? Well that's just visceral. Almost like you're grounded to the road.

Even if you have little (or no) experience with the difference, you might still be able to get the sense if you've spent some time on roller coasters. Think about a traditional setup, train on top of tracks, as compared to a suspended steel coaster. Totally different sensation -- one feels like you're being lifted, even on a descent. The other is like falling and being caught at the last minute. Even if the coasters follow similar paths, there's a reason the engineers came up with more than one design.

How the Tesla Turbine Works
Is it true that a diesel engine can operate under water while a gasoline engine cannot?
Why is quality motor oil important?