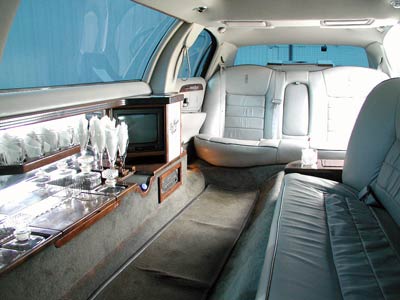 The interior of a stretch limo, complete with bar and entertainment center.
Photo Marc Dorset, SXC

A company called Armbruster built the first stretch limousine in 1928. They built the coach -- otherwise known as the compartment where the passengers sit -- specifically to transport larger groups of affluent people. Armbruster and other companies built these cars from the ground up rather than convert an existing vehicle; the cars were always meant to be longer cars that could hold more passengers than your average automobile.

Eventually, Armbruster merged with a company called Stageway Coaches and stopped building its own cars. The new company began to convert Cadillac and Lincoln cars into stretch limousines, mainly for funeral processions. As stretch limousines became more popular, other companies began to enter the market, converting everything from classic luxury vehicles to high-end sports cars and SUVs.

Rolls-Royce cars like this one were often used as limousines.
Photo Getty Images

Some companies use more sophisticated tools than others, but the actual series of steps remains pretty much the same among companies. First, they strip the interior out of the car and protect everything remaining with fire-resistant paper -- including any glass. Next, mechanics mount the car on a set of rails. You can adjust the rails to elevate the car off the ground. The rails help keep the front and back of the car aligned properly. Usually one side of the rails rests on a rolling dolly.

Mechanics then cut the car in half -- the most crucial part of any conversion. Some mechanics use laser-guided machinery to make precise cuts while others rely on the skilled hand of an experienced mechanic. The back half of the car mounted on the rails' dolly section is pulled back.

Next, mechanics weld a base to the front and back half of the car, extending it to its ultimate length. They weld in temporary braces to keep the frame from twisting or warping -- any errors in this step could cause the vehicle to become unsafe or even impossible to drive. Mechanics extend the drive line from the engine back to the rear axle by connecting multiple drive lines together. They extend the electrical components using connectors between the original wiring and the new wiring that will extend the length of the car.

Once the mechanics put the base in place and extended the driveline -- the parts of the power train -- pillar posts are installed where new doors will attach to the body of the limousine. The floor pan (the floor of the limousine) is installed, covering up the driveline and framework. Mechanics must also reinforce the brakes, suspension and steering mechanisms for the car -- adding more mass to the car means that it becomes more difficult to control and stop due to inertia.

Next, a prefabricated exterior is installed over the limo's frame and the vehicle is outfitted with a new interior, including any lavish amenities. Finally, the limo goes into the paint shop, where painters give it a uniform, brand new paint job.

In the next section, we'll look at some of the amenities you can find in the world's most luxurious limousines.

All cars in the United States must meet the Federal Motor Vehicle Safety Standards (FMVSS) before they can hit the road. Once a conversion company adds weight to the original vehicle, the former FMVSS tests are void, and the company must conduct new tests to prove its limousines meet federal standards. The conversion company becomes the new manufacturer of the vehicle in the eyes of the government -- in other words, that stretch Lincoln is no longer a Ford vehicle as far as they're concerned. Ford and Cadillac both have programs that help companies ensure converted vehicles meet FMVSS. The Ford program is known as the Qualified Vehicle Modifier (QVM) program and the Cadillac program is the Cadillac Master Coachbuilder (CMC) program. They hold regular inspections to ensure that conversion companies participating in the program are maintaining preset standards [source: Ford, Cadillac].