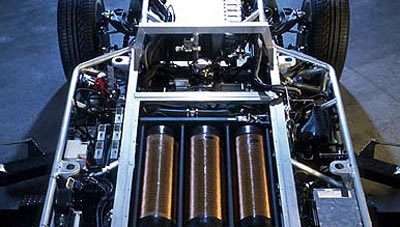 In a hydrogen fuel cell, a catalyst breaks hydrogen molecules in the anode into protons and electrons. The protons move through the exchange membrane, toward the oxygen on the cathode side, and the electrons make their way through a wire between the anode and cathode. On the cathode side, the hydrogen and oxygen combine to form water. Many cells are connected in series to move substantial charge through a circuit.

The "Hy" in Hy-wire stands for hydrogen, the standard fuel for a fuel cell system. Like batteries, fuel cells have a negatively charged terminal and a positively charged terminal that propel electrical charge through a circuit connected to each end. They are also similar to batteries in that they generate electricity from a chemical reaction. But unlike a battery, you can continually recharge a fuel cell by adding chemical fuel -- in this case, hydrogen from an onboard storage tank and oxygen from the atmosphere.

The basic idea is to use a catalyst to split a hydrogen molecule (H2) into two H protons (H+, positively charged single hydrogen atoms) and two electrons (e-). Oxygen on the cathode (positively charged) side of the fuel cell draws H+ ions from the anode side through a proton exchange membrane, but blocks the flow of electrons. The electrons (which have a negative charge) are attracted to the protons (which have a positive charge) on the other side of the membrane, but they have to move through the electrical circuit to get there. The moving electrons make up the electrical current that powers the various loads in the circuit, such as motors and the computer system. On the cathode side of the cell, the hydrogen, oxygen and free electrons combine to form water (H2O), the system's only emission product. (See How Fuel Cells Work for more information.)

One fuel cell only puts out a little bit of power, so you need to combine many cells into a stack to get much use out of the process. The fuel-cell stack in the Hy-wire is made up of 200 individual cells connected in series, which collectively provide 94 kilowatts of continuous power and 129 kilowatts at peak power. The compact cell stack (it's about the size of a PC tower) is kept cool by a conventional radiator system that's powered by the fuel cells themselves.

Another view of the Hy-wire
Photo courtesy General Motors

This system delivers DC voltage ranging from 125 to 200 volts, depending on the load in the circuit. The motor controller boosts this up to 250 to 380 volts and converts it to AC current to drive the three-phase electric motor that rotates the wheels (this is similar to the system used in conventional electric cars).

The electric motor's job is to apply torque to the front wheel axle to spin the two front wheels. The control unit varies the speed of the car by increasing or decreasing the power applied to the motor. When the controller applies maximum power from the fuel-cell stack, the motor's rotor spins at 12,000 revolutions per minute, delivering a torque of 159 pound-feet. A single-stage planetary gear, with a ratio of 8.67:1, steps up the torque to apply a maximum of 1,375 pound-feet to each wheel. That's enough torque to move the 4,200-pound (1,905-kg) car 100 miles per hour (161 kph) on a level road. Smaller electric motors maneuver the wheels to steer the car, and electrically controlled brake calipers bring the car to a stop.

The gaseous hydrogen fuel needed to power this system is stored in three cylindrical tanks, weighing about 165 pounds (75 kilograms) total. The tanks are made of a special carbon composite material with the high structural strength needed to contain high-pressure hydrogen gas. The tanks in the current model hold about 4.5 pounds (2 kg) of hydrogen at about 5,000 pounds per square inch (350 bars). In future models, the Hy-wire engineers hope to increase the pressure threshold to 10,000 pounds per square inch (700 bars), which would boost the car's fuel capacity to extend the driving range.

Ultimately, GM hopes to get the fuel-cell stack, motors and hydrogen-storage tanks small enough that they can reduce the chassis thickness from 11 inches to 6 inches (15 cm). This more compact "skateboard" would allow for even more flexibility in the body design.