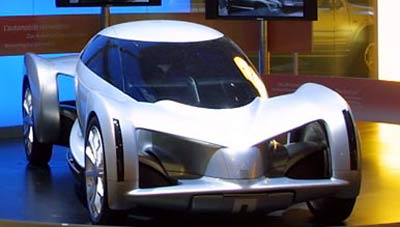 If you've ever looked under the hood of a car, you know an internal combustion engine requires a lot of additional equipment to function correctly. No matter what else they do with a car, designers always have to make room for this equipment.

The same goes for mechanical and hydraulic linkages. The basic idea of this system is that the driver maneuvers the various actuators in the car (the wheels, brakes, etc.) more or less directly, by manipulating driving controls connected to those actuators by shafts, gears and hydraulics. In a rack-and-pinion steering system, for example, turning the steering wheel rotates a shaft connected to a pinion gear, which moves a rack gear connected to the car's front wheels. In addition to restricting how the car is built, the linkage concept also dictates how we drive: The steering wheel, pedal and gear-shift system were all designed around the linkage idea.

The Hy-wire has wheels, seats and windows like a conventional car, but the similarity pretty much ends there. There is no engine under the hood and no steering wheel or pedals inside.
Photo courtesy General Motors

The defining characteristic of the Hy-wire (and its conceptual predecessor, the AUTOnomy) is that it doesn't have either of these two things. Instead of an engine, it has a fuel cell stack, which powers an electric motor connected to the wheels. Instead of mechanical and hydraulic linkages, it has a drive by wire system -- a computer actually operates the components that move the wheels, activate the brakes and so on, based on input from an electronic controller. This is the same control system employed in modern fighter jets as well as many commercial planes.

The result of these two substitutions is a very different type of car -- and a very different driving experience. There is no steering wheel, there are no pedals and there is no engine compartment. In fact, every piece of equipment that actually moves the car along the road is housed in an 11-inch-thick (28 cm) aluminum chassis -- also known as the skateboard -- at the base of the car. Everything above the chassis is dedicated solely to driver control and passenger comfort.

This means the driver and passengers don't have to sit behind a mass of machinery. Instead, the Hy-wire has a huge front windshield, which gives everybody a clear view of the road. The floor of the fiberglass-and-steel passenger compartment can be totally flat, and it's easy to give every seat lots of leg room. Concentrating the bulk of the vehicle in the bottom section of the car also improves safety because it makes the car much less likely to tip over.

But the coolest thing about this design is that it lets you remove the entire passenger compartment and replace it with a different one. If you want to switch from a van to a sports car, you don't need an entirely new car; you just need a new body (which is a lot cheaper).

You can always switch back when you need the van again. The logistics of switching is still unclear -- if the idea catches on, there might be special switching stations where you can keep your different car bodies, or there might be a way for drivers to switch the car bodies themselves in their own garage.

GM originally dubbed its working concept for a drive-by-wire fuel-cell car the AUTOnomy, to highlight the flexibility of the computer control and switchable car bodies. When it came time to name the actual drivable version, the design team recruited a group of kids, ranging from six to 15 years old, to come up with interesting possibilities. Candy-fueled brainstorming sessions yielded hundreds of names, including Wildcard, Moonshot, Jetson and Volt. GM ultimately went with 14-year-old Aleksei Dachyshyn's suggestion, Hy-wire, because it nicely summarized the hydrogen-fuel-cell and drive-by-wire concepts at the vehicle's core.