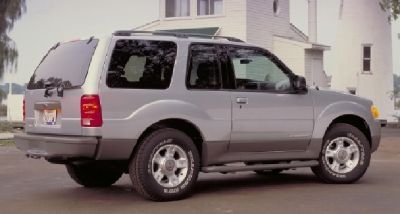 ©Ford via Wieck The 2002 Explorer's rear-window glass supports were a safety concern.

Clutch (2002, 2003, 2004): A hopping or binding sensation from the rear axle may be caused by binding in the limited-slip clutch packs; this requires replacing the clutch packs with revised units and using reformulated gear lube.

Coolant leak, V8 models (2002): Coolant may leak at the intake manifold crossover due to a crack in the manifold.

Engine noise, V8 models (2002, 2003, 2004): A ticking noise may relate to problems with the valve guides, requiring possible replacement of one or both cylinder heads.

Fuel gauge, V6 models (2002): The gauge reading may suddenly drop to empty due to an electrical problem with the flex-fuel module.

Fuel pump (2002): Stumbling or hesitation when making aggressive right turns may be caused by cavitations in the fuel tank as the fuel sloshes to one side; a redesigned fuel pump is required.

Oil leak (2003, 2004): An oil leak from the right-side axle may be caused by the seal coming loose and spinning in the housing; a complete axle assembly replacement is required.

Spark plugs (2004, 2005): Due to carbon build-up, the spark-plug hole threads in the cylinder heads are easily damaged or stripped when removing the plugs.

Timing belt (2002): A rattling noise from the front of the engine may be caused by slack in the timing chain; a redesigned primary chain tensloner should be installed.

Windows (2002): On some vehicles, the rear-window glass supports may come loose, causing the window to break; dealers would reposition and secure the support brackets.

2002 (with high-back seats): The upper bolt on the driver's seat could fracture, allowing the seat to recline until it contacts an object, thus increasing the risk of a crash. Dealers would replace the driver-seat upper bolt. In addition, seats with tubular back frames would have the fully threaded lower recliner bolt replaced.

2002: The tires on the vehicle's right side may have horizontal cuts in the tread that occurred during assembly, increasing the risk of tire failure. Dealers would inspect and replace affected parts.

2002, 2003: The liftgate-glass strut may disengage or its hinge may fracture, allowing glass to fall and possibly break.

2002, 2003: The courtesy lights inside the running boards (where equipped) may overheat when exposed to excessive moisture or road salt. Dealers would inspect and replace affected parts.

2006: Some vehicles may have a windshield wiper motor that was produced without sufficient grease applied to the output shaft gear. This could cause the gear to distort or fracture after continuous use on the high-speed setting, resulting in a loss of wiper function and impaired visibility. Dealers would inspect and repair wiper-motor gears as needed.