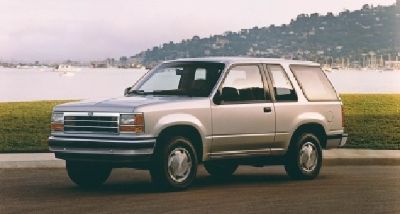 The Ford Explorer rolled in for 1991 and fast became the benchmark for all other mainstream sport-utility vehicles. Offering a considered blend of car and truck attributes, the Explorer hit the mark with consumers to become a runaway sales success.

The Explorer was introduced in 1991 as Ford's new "junior" sport-utility vehicle, a smaller companion to the full-size Bronco. Two wagon body styles were offered, both with rear liftgate: a two-door with a 102.1-inch wheelbase, replacing the compact Bronco II; and a new four-door on a 111.9-inch wheelbase, among the longest in the class. Both body types measured 70.2 inches across and 68.2 inches tall. The length was 174.4 inches for the two-door, 184.3 for the four-door.

Some underskin components came from Ford's Ranger compact pickup truck, including a 4.0-liter/255-cubic-inch overhead-valve V6 with 155 horsepower, the only engine available. Transmissions were the expected five-speed manual and optional four-speed automatic, linked to rear-wheel drive or optional four-wheel drive.

The latter was a so-called on-demand system with separate low-range gears, auto-locking front hubs, and Ford's Touch-Drive, which allowed switching between two-wheel High and four-wheel High ranges at low speeds by pushing a dashboard button. This was convenient, though Ford did recommend changing back to two-wheel operation by first stopping the vehicle, then backing up a few feet, this to fully disengage the four-wheel drive. A more basic system with a floor-mounted transfer-case lever and manual front hubs was available for credit.

Debt trim levels were XL, Sport, and Eddie Bauer for the two-door; XL, XLT, and Eddie Bauer for the four-door. Eddie Bauer versions had paint and trim inspired by the outdoor clothing retailer, but the four-door XLT quickly proved the most popular single model. All Explorers came with power steering and rear antilock brakes that operated in rear-wheel drive. Two-door models seated four on front buckets and a rear bench. The four-door versions carried five as standard, six with an optional front bench.

Consumer Guide found much to like in Ford's new SUV, especially compared to its predecessor, the Bronco II. Heading the list were a relatively low ride height for easy entry/exit, the four-door's roomy interior, and a torquey V6 providing strong -- if somewhat noisy -- full-throttle acceleration, though top-gear cruising was pleasantly relaxed. Moreover, said the editors, "Explorer's longer, wider stance prevents it from acting tipsy in turns, the way the Bronco II did, while the [four-door's] wheelbase gives it a cushy ride for the class." The two-door had a "decidedly choppier" ride, "but its reduced bulk makes it one of the most responsive vehicles of this type. The standard Touch-Drive system is foolproof to use. Our advice: Don't buy another sport-utility without test driving an Explorer."

That same strong recommendation also applied to the Mazda Navajo, a retrimmed two-door Explorer built in the same U.S. factory as a hoped-for sales-booster for Ford's longtime Japanese affiliate. Mazda had never offered an SUV before, but whether because of the brand name or a smaller dealer network, the Navajo drew few sales and would be dropped after model-year 1994.

The Ford Explorer received a few detail updates for its second year. Horsepower was rerated to 145 with manual shift, 160 with the automatic transmission (ordered by the vast majority of customers). Sport and XLT versions now included a rear window wiper/washer, and the available power windows added a one-touch-down feature for the driver's window. Six-way power front bucket seats were newly standard for Eddie Bauers and optional for other Explorers. Deep-tinted rear "privacy glass" was a new extra for four-doors.

An important "active safety" feature was added to the Explorer: standard four-wheel antilock brakes that operated in both two- and four-wheel drive. Changes were otherwise few and minor: new designs of the road wheels, steering wheel, and instrument panel graphics, plus an available "running board" side steps for four-doors.

The Explorer now had a strong competitor in the year-old Jeep Grand Cherokee, which offered an optional V8 engine, more convenient four-wheel-drive systems, and a standard driver's-side airbag. This led Consumer Guide to recommend that buyers drive both the Ford and the Jeep. Though many folks probably did just that, Explorer sales kept rolling along --and would roll even higher with a substantial makeover for 1995.