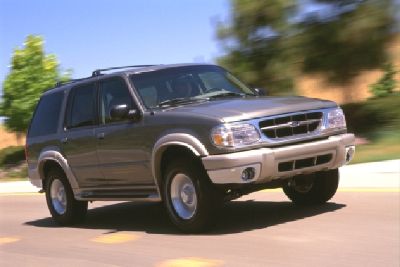 ©Ford via Wieck The 2000 Ford Explorer was recalled due to side airbag problems.

Air conditioner (1995, 1996 model years): Water may drip onto the floor when the air conditioner is operated because the evaporator strip seals were not properly positioned.

Hard starting (1996): If the engine does not start, or cranks for a long time and then stalls, the idle air-control valve may be sticking.

Keyless entry (1995, 1996, 1997): This may fail to operate due to damage from static electricity to the Remote Anti-theft Personality (RAP) module; if damage has occurred, a redundant ground must be added on the passenger seats.

Radiator (1995, 1996): The radiator may leak in cold weather because of a bad seal between the tank and core.

Vehicle noise (1995-96): A chattering noise felt coming from the rear during tight turns after highway driving may be caused by a lack of friction modifier or over-shimming of the clutch packs in the Traction-Lok limited-slip differential.

Vehicle noise (1995, 1996): Loose frame rivets should be replaced with bolts (welding is not approved).

1995 (two-door): Brake tubes in some models were misrouted, resulting in excessive stopping distance.

1995: Inner tie-rod assemblies can fracture, resulting in shaking or shimmy in low-speed driving.

1995: The passenger-side airbag's inflator body may be cracked and not inflate properly; also, the igniter end cap can separate, causing hot gases to be released.

1996: The driver's door, when closed only to secondary latched position, may not sustain the specified load.

1996: The gas-cylinder bracket may not properly support the rear liftgate.

1996, 1997 (15 northern states): The engine may not return to idle after operation at highway speeds at below 20 degrees Fahrenheit.

1997, 1998 (with 4.0-liter engine): A gap between the plate and bore of the throttle body was too narrow, causing the throttle pedal to stick.

1997, 1998 (with SOHC 4.0-liter engine): Fuel lines can be damaged and a fire could result if the vehicle is jump-started and a ground cable is attached to the fuel-line bracket near the battery.

1997, 1998: Certain off-lease vehicles, Canadian in origin but sold in the U.S., have daytime running lights that do not meet U.S. specifications.

1997, 1998, 1999: The speed-control cable on certain vehicles can interfere with the servo pulley, preventing the throttle from returning to idle when disengaging the speed control.

1998 Eddie Bauer and Limited: The key-in-ignition/door-open warning chime may not function properly.

1998, 1999: The secondary hood latch on certain vehicles may corrode and stick in open position.

1999: The right front-brake line to hydraulic control unit connection could separate, causing leakage when the brake pedal is applied.

2000 (with side airbags): The side airbags could deploy if the ignition key is in the "run" position and the seatbelt webbing is extracted from locked retractor with jerking motion.

2000, 2001 (Sport and Sport Trac): The hood striker could fracture, causing the hood to fly open while the vehicle is being driven.

2001 (with high-back seats): The upper bolt on the driver's-side seat could fracture, allowing the seat to recline until it contacts an object, thus increasing the risk of a crash. Dealers would replace the driver-seat upper bolt. In addition, seats with tubular back frames would have the fully threaded lower recliner bolt replaced.

Explorer's continuing success had encouraged Ford to expand its SUV lineup, and by 2001 it could claim the industry's broadest array, from the compact Escape to the imposing Excursion. But the Explorer remained at the heart of the market, and the market was changing -- fast. Could the Explorer change with it and still be successful? You'll find the answers by going on to the next page.