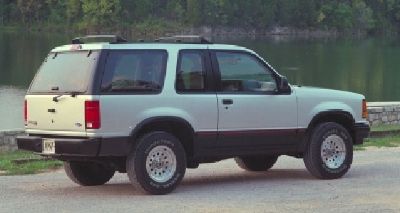 ©2007 Publications International, Ltd. Vehicle noise was a problem for Explorer models from 1991 through 1994.

Need reliability ratings and/or safety recall information for the 1991, 1992, 1993, and 1994 Ford Explorer? We cover these important topics on this page.

Brakes (1991, 1992, 1993, 1994 model years): Brakes may be grabby after the vehicle is parked outdoors in damp weather due to moisture absorbed by linings. Revised rear shoes were offered.

Vehicle noise (1991, 1992, 1992, 1994): A chattering noise felt coming from the rear during tight turns after highway driving may be caused by a lack of friction modifier or over-shimming of the clutch packs in the Traction-Lok limited-slip differential.

1991 (models with A4LD automatic transmission): Vehicle may appear to be in "Park" position, even if the parking pawl is not fully engaged.

1991: Seatbelts may be defective, resulting in insufficiently latched or unlatched belt.

1991, 1992, 1993, 1994: On vehicles sold or registered in specified southern California counties, studs that attach the master cylinder to the power-brake-booster assembly can develop stress corrosion cracking after an extended period; these fractures could cause separation of the master cylinder when brakes are applied.

1992, 1993: Bracket welds for the liftgate's hydraulic lift cylinders can fracture.

1992, 1993, 1994: A short circuit can occur in the remote-power-mirror-switch circuit board; an overheating in the board and/or in other plastic and elastomeric components can result in smoke or fire.

1993, 1994 (with manual shift): Parking-brake self-adjust pawl does not line up properly and can slip.

1993, 1994: Some bracket welds for the liftgate's hydraulic lift cylinder could fracture, resulting in potential for the liftgate bracket to gradually bend, allowing the ball stud to disengage.

It's fair to say that the Ford Explorer was a key factor in convincing millions of people to switch from cars to trucks, thereby tipping the market balance in favor of trucks by decade's end. Meanwhile, Ford faced the problem of how to follow its smash-hit SUV. To learn their answer, just click to the next page.