The Future of Hybrids 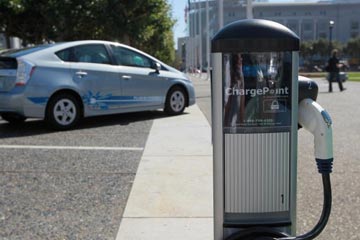 A new electric vehicle charging station near San Francisco city hall. There are currently 120 stations in the area but the city plans to increase that to 5,000 in coming years.
Justin Sullivan/Getty Images

What's next for the future of alternative power vehicles? Well for starters, a car that runs on electricity comes to mind. When one hears the word, "electric," an episode of the futuristic cartoon "The Jetsons" might pop into the brain. But in this case, we're referring to plug-in hybrids and electric vehicles.

The plug-in hybrid, also known as the plug-in hybrid electric vehicle (PHEV), gets some or most of its juice from electrical energy stored in the car's batteries. The PHEV still uses a gasoline-powered engine, but the gas kicks in when the battery runs down. Some of the battery packs can be charged in standard electric outlets at home or work or in an electrical generator found in the vehicles. Other battery packs will require drivers to find larger power supplies typically not found at homes. Down the road, there are plans to build recharging networks and public recharging stations along regular highway routes [source: Hybridcars.com].

An electric car or electric vehicle (EV) gets its power from an electric motor instead of an internal combustion engine. The rechargeable batteries are charged the same way as the plug-in hybrids. In the past, critics raked them over the coals for their cost and because the short life of the car's battery limited drivers to short distances. Now, new technology and innovation have allowed modern car companies to improve upon the features of the electric car. Companies like Nissan are rolling out new versions of the EV. In fact, EV fans will have to wait until 2011 because dealers have already sold out the entire fleet of Nissan's all-electric Leaf [source: Business.Inquirer.Net].

The jury is still out on whether electric cars will be as widely received as hybrids were when first introduced more than 10 years ago. But whatever form they take, alternative vehicles will be around as long as people are looking for ways to limit the greenhouse effect and save a little cash at the same time.