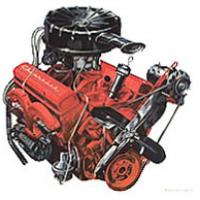 The Turbo-Fire V-8 was bored out to 283 cid for 1957, would be a Chevy performance mainstay into the '70s.
Publications International, Ltd.

The great small-block Chevy V-8 reached its second important development plateau in 1957. While the 265 was retained as the "base" engine this model year, the big news was the new 283-cid enlargement, achieved by punching out bore to 3.88 inches. In its mildest tune it produced 185 bhp at 4600 rpm; a four-barrel card brought this up to 220 bhp; two fours resulted in either 245 or 270; and Chevy's new "Ramjet" fuel injection system boosted output to no less than 250 or 283. The last was the ultimate, achieving the magic goal of one horsepower per cubic inch, and was offered with close-ratio three-speed manual transmission only.

The "fuelie" was carefully developed for good reliability. Mechanical valve lifters substituted for hydraulics when FI was specified. Longer-reach spark plugs with the metal deflection shields were used to protect wiring and plug caps from manifold heat. The top block was a thicker casting to prevent cylinder wall distortion though over-tight hold-down bolts. Fuel passages were tapered, increasing in cross-sectional area toward the inlet ports and in the "ram's horn" exhaust manifold to provide better scavenging and increased volumetric efficiency. There was new distributor, with the breaker points directly above the shaft bearing to help reduce fluctuations in the gap setting. And the front and intermediate main bearings were 0.063-inch thicker.

Though made by GM's Rochester carburetor division, the Ramjet fuel injection system was designed almost entirely by the Engineering Staff, simplified for production by Harry Barr and Zora Arkus-Duntov. It consisted of three main components: fuel meter, manifold assembly, and air meter, replacing intake manifold carburetor. The unit took in air first, then injected fuel directly into each intake port for mixing. The amount of fuel used was very precisely controlled, again for better volumetric effiency and mileage. Cold-weather starting and warm-up were improved, and the unit by itself boosted output by about 5 bhp compared to the twin four-barrel carbureted engine. Chevrolet claimed that FI eliminated manifold icing, and reduced the tendency to stall when cornering hard.

A special two-piece aluminum manifold casting was used on 283 V-8s equipped with fuel injection. The upper casting contained air passages and air/fuel metering system bases, while the lower casting made up ram tubes and covered the top center of the engine.

A major engineering development is never simple - or easy. And although the introduction of Ramjet injection was a milestone in Chevy history, bugs were inevitable. At the Daytona Speed Weeks, for example, the fuel cut off during acceleration characteristic was eliminated because this created a flat spot in response. Fuel nozzles, too, required attention. They were extended further into the air stream to prevent them from absorbing too much heat and casing rough idling.

There were no formal published tests of the fuel-injected 283 in a standard Chevrolet, but performance of the "fuelie" in Corvettes is worth mentioning. The 0-60 mph acceleration times of the most potent versions consistently averaged just over 6 seconds, and top speeds were in the region of 140 mph. Driving a 250-bhp FI Corvette (33 bhp below the 1957 maximum), Walt Woron of Motor Trend magazine whizzed through the 0-60 sprint in just 7.2 seconds. With a special 283 sporting 10.5:1 compression, dual exhausts, special cam, and solid lifters, the car did 134 mph, and convinced Woron that even at that it wasn't really extended. Extrapolating from these results, a two-door sedan weighing 400 pounds more than the 'Vette might have done 0-60 in about 8 seconds and hit a top of 120 mph with the right gearing.