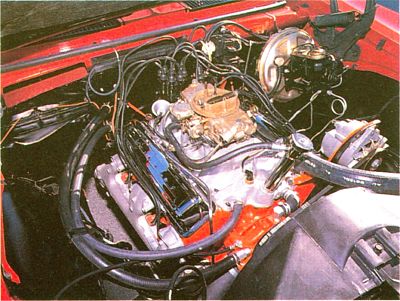 The first Z-28 was to Chevrolet's Camaro what the Boss 302 was to Ford's Mustang: a factory-engineered race-ready "ponycar" available at your corner showroom. But where Camaro trailed Mustang to market by two years, the Z-28 appeared two years before the Boss.

Announced in early 1967, some six months after the Camaro itself, the Z-28 was conceived by Chevrolet engineer and product-promotion specialist Vincent W. Piggins. The impetus, as Piggins later explained, was "to develop a performance image for the Camaro that would be superior to Mustang's. Along comes [Sports Car Club of America] in creating the Trans-Am sedan racing class for professional drivers in 1966 ... I suggested a vehicle that would fit this class and, I believe ... it gave them the heart to push ahead.... "

Initially, the Trans-Am involved Group II production cars with wheelbases of 116 inches or less and engines of no more than 305 cubic inches. Certification required at least 1,000 be built per model year. Chevy met this by entering the standard V-8 Camaro as a Group I sports car (over 305 cid) and the Z-28 option under Group II.

Rule-bending aside, the Z-28 was a racer's delight: heavy-duty suspension, power front-disc brakes, metallic-lined rear-drum brakes, 15 x 6 Corvette wheels mounting 7.75 x 15 tires, special hood with functional air intakes, close- or wide-ratio four-speed gearbox, and a new 302 V-8. The last came from slotting the crankshaft from the older 283 engine into the then-current 327 block, yielding 302.4 cid -- just under the limit. Outputs were conservatively stated as 290 horsepower and as many pounds/feet of torque, but actual bhp was nearer 400, thanks to a huge four-barrel Holley carb, oversize intake manifold, big ports and valves, wild 346-degree-duration cam, and cast-iron headers.

Chevrolet called the Z-28 "the closest thing to a 'Vette, yet," and not without reason. Car and Driver clocked one at a blazing 6.7 seconds 0-60 mph, versus 7.8 seconds for the typical four-speed SS350 and slightly under 11 seconds for an automatic 210-bhp 327. Handling was racer-sharp; braking as good as it could be with contemporary technology. 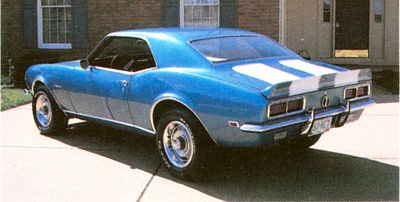 Only 602 of the 1967 Chevrolet Camaro Z-28s were built during its debut season.
©2007 Publications International, Ltd.

The "civilian" 1967, 1968, 1969 Chevrolet Camaro Z-28 package, which also included broad dorsal racing stripes, ostensibly added just $400 to a Camaro's price. But it was closer to $800 because the four-speed, front discs, headers, and special rear brake linings were separate "mandatory options." Of course, you could add all manner of regular Camaro goodies, including Positraction limited-slip differential, rear spoiler, and the Rally Sport appearance group. So delivered, prices could easily exceed $5,000 -- still hardly outrageous.

But wins, not sales, were the Z-28's main goal, and in due time they were convincingly achieved. Mustang claimed the Trans-Am championship in 1966 and again in 1967, when Z-28s won only three events. But Camaro dominated the series in 1968 and 1969, thanks to the all-star Roger Penske team and ace driver Mark Donohue.

Other than a substantial face-lift, shared with other Camaros, the most obvious change in the 1969 Z-28 was a mean-looking "Cowl Induction" hood with a rear-facing scoop that gulped in air from the high-pressure area just ahead of the windshield. The deep-breathing, high-winding 302 switched to four-bolt main bearings, and rolling stock slimmed to six-inch-wide rims wearing E70-15 high-performance tires.

Paralleling the entire Camaro line, the 1969s are the most numerous of the first-generation Z-28s with 19,014 built -- quite high for such a specialized machine. That figure also represented a substantial gain on the 7,199 of 1968, which in turn was a sizable increase over the mere 602 for 1967. Needless to say, those first-year models are today the most collectible Z-28s, not least for being most like the all-out competition cars Piggins had in mind.

Of course, the Z-28 has since seen far higher volume, but only by becoming more and more like other Camaros -- and far less potent. Happily, it got a lot more exciting as time went by. But later Z-28s could never cast the same spell as the 1967-1969 originals. Magical muscle machines all, they were a unique, short-lived breed the likes of which we shall not see again.

The 1967-1969 Chevrolet Camaro Z-28 was created after Chevrolet's Camaro and became a racer's delight.