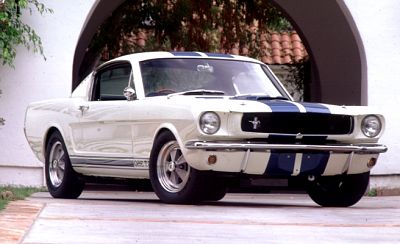 The original '65 Shelby GT-350 was probably as close to a street-legal racing car as was ever offered by an American company.
©David Newhardt

Carroll Shelby, maker of the 1965-1966 Shelby GT-350, was a Texas chicken farmer who drove for Enzo Ferrari in the '50s and retired from racing for health reasons in 1960. He then became America's most charismatic maker of high-performance specialty cars. Between 1962 and 1970 he built or contributed to such blindingly fast machines as the awesome Cobra 289 and 427, as well as the Sunbeam Tiger and Ford's mid-engine GT40 and Mark IV competition cars. The last took Ford to the performance pinnacle with outright victories in the 24 Hours of Le Mans in 1966-69.

Shelby's most popular project from a sales standpoint was the GT-350, a super-tuned version of the Ford Mustang. It was born of Dearborn's desire to give its new 1965 "ponycar" a solid performance image, and it did precisely that by reigning as national Sports Car Club of America B-production champion for three years in a row (1965-67).

Also installed were Koni adjustable shocks, quick-ratio steering box, front anti-sway bar, a stout steel-tube underhood brace, and 15-inch cast-aluminum wheels with high-performance Goodyear tires. Finally, the front suspension's forward mounts were relocated for optimum geometry. The result of all this was near-neutral handling instead of the standard Mustang's strong understeer -- plus ferocious performance with 306 rated horsepower, versus the factory's 271.

Outside, the Mustang's prancing pony was relocated on the grille, the stock steel hood was replaced by a fiberglass replica with functional scoop, and broad blue racing stripes were applied to rocker panels and atop hood, roof, and trunklid. Inside were racing seatbelts, wood-rim steering wheel, full instrumentation -- and no back seat, in order to qualify the GT-350 as a "sports car" under SCCA rules.

But this was just for the street. For the track, Shelby devised a "GT-350R" with special high-power heads, super-duty suspension, racing tires, aluminum transmission case, stripped interior, and a bumperless fiberglass nose with rudimentary air dam and large central air slot. All this reduced curb weight by some 300 pounds. Per his philosophy, Carroll made most of the special racing parts available over-the-counter at selected Ford dealers.

The Shelby GT-350 started as a white Mustang 2+2 fastback to which high-performance suspension, brake, and engine modifications were made.
©David Newhardt

Despite some subtle softening, the '66 edition was as vivid as the '65. External changes included fixed Plexiglas rear side windows instead of the stock fastback's air-exhaust vents, plus side scoops for rear-brake cooling, Mustang's thin-bar '66 grille, and 14-inch chrome-style or cast-aluminum wheels.

After the initial 250 or so units, Shelby expanded color choices to include red, blue, green, and black, all with white stripes. At the same time he added the stock fastback's optional fold-down rear seat, returned the battery to the engine compartment from its former trunk location, reverted to heavy-duty Ford shocks-and offered automatic transmission. But he also listed an optional Paxton centrifugal supercharger that allegedly boosted horsepower beyond 400 and cut 0-60 times to a mere five seconds. Finally, Shelby built a fleet of gold-on-black "GT-350H" models for the Hertz Rent-A-Car company, which leased them at major airports -- and soon ceased after finding that many were raced on weekends.

Other GT-350s continued racing and winning in '66, but they were essentially the cars that had competed the previous year, as no '66 R-models were built. However, Shelby did construct six '66 convertibles as gifts -- presumably for very special friends.

But all good things must come to an end, and Shelby-Mustangs wouldn't be quite the same after 1966. Indeed, post-'67 models became more like regular Mustangs and were even built by Ford, hence the higher status -- and prices --- of these early models among collectors. But that's only as it should be. Unquestioned thoroughbreds, the 1965-66 GT-350s remain some of the hairiest and most memorable American cars ever built -- and always will.

The next page contains 1965-1966 Shelby GT-350 mechanical and production specifications.

With a 289 V-8 and four-speed manual gearbox, along with a body borrowed from the Ford Mustang 2+2 fastback, the 1965-1966 Shelby GT-350 was probably as close to a street-legal racing car as ever was offered by an American company.