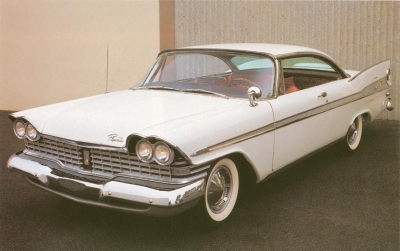 Sport Fury was the name given to the limited edition at the top of the Plymouth line in 1959. See more classic car pictures.
©2007 Publications International, Ltd.

Detroit has long played name games of the type used on the 1959 Plymouth Sport Fury, and often to the great confusion of car buyers. Thus have the automakers trotted out all-new models with old handles, to cash in on past glories, or created new titles to make old cars seem new.

In the 1950s, the industry hit upon a variation that's still in widespread use. Its called the "trickle-down game." A new name appears on a top-end model or series, then filters to the bottom of the line via elimination of older and/or lower-status names. History is full of examples: Bel Air and Impala at Chevrolet, Fairlane and Galaxie at Ford.

Chrysler Corporation is a past master at the sport, and it added an interesting twist with Plymouth's 1959 Sport Fury. The Fury began as a speedy, limited-edition 1956 hardtop, and continued as such for the next two years.

Though never a big seller, it cast a performance image over the entire Plymouth line with obvious sales implications, and division marketers just couldn't resist trying to capitalize on it.

Accordingly, they put the Fury label on all top-of-the-line 1959 Plymouths except Suburban wagons, removed Plaza nameplates from low-end models, and pushed Belvedere and Savoy down a notch. The only problem this created was what to call the limited edition. Well, the 1956-1958 Fury had definitely been sporty, so why not name its 1959 successor Sport Fury? That they did.

And for the first time they offered their hottest car as a convertible as well as the customary hardtop coupe. Curiously, though, the new standard Fury line didn't list a ragtop, just a pair of hardtops and a four-door sedan.

Of course, this was just what the sales department wanted, and it helped Plymouth hold onto third place in recovery 1959 despite total volume that rose by only 15,000 units -- while Chevrolet gained more than 300,000 units, Ford nearly half a million.

To learn about styling and flashy options for the 1959 Sport Fury, continue to the next page.

The trunklid decor on the 1959 Plymouth Sport Fury was supposed to look like an outside spare tire.
©2007 Publications International, Ltd.

Plymouth had roared back into third place in sales on the strength of its handsome 1957 models. Chrysler wanted to keep it there, so after detail changes for 1958, Plymouth received a more substantial restyling for the last iteration of its three-year design cycle, including the 1959 Plymouth Sport Fury.

As face-lifts go, the 1959 wasn't bad, but it wasn't great either, just different. Curiously, Sport Furys wore no identifying script, just a large circular crest above a broad swath of anodized aluminum on the rear flanks.

Chrysler design chief Virgil Exner had been taken with the idea of translating classic-era motifs to modern cars, and his first attempt appeared this year in a new Plymouth option: a trunklid appliqué that supposedly suggested an outside spare tire but looked more like a trash-can lid.

Chrysler laid on a lot of other gimmicks for 1959, and even Plymouth buyers could order an electronic headlight dimmer, self-dimming rearview mirror (unpopular then, but destined for greater success in its 1980s reincarnation) and, for convertibles and hardtop coupes, individual bucket seats that swiveled outward when a door was opened to assist entry/exit.

Mechanically, Plymouth mostly marked time for 1959. The ancient "PowerFlow" L-head six was in its final year and basically unchanged, V-8s began with the 318 first seen in the 1957 Fury, now producing 230 horsepower in base V-800 trim or 260 horsepower with optional "Superpak" four-barrel carb and dual exhausts.

A bore job took the top "Golden Commando" engine from 350 to 361 cubic inches, but horsepower remained 305 on the same 10.0:1 compression. Fuel injection, a brief and troublesome 1958 flirtation, was no more.

Plymouth belatedly joined Detroit's short-lived fling with air suspension by offering an optional rear-only setup for 1959. This used both air bags and lighter leaf springs, plus modified front-torsion-bar geometry. Installations are unknown, but couldn't have been significant.

And for about six years after 1959, neither was Plymouth. With 1960's all-new "Unibody" line began a dark period of oddball styling, abortive downsizing, sloppy workmanship, halting corrective measures, and disappointing sales. Not until the 1970s would Plymouth regain third place, and it didn't hold onto it for long.

The Sport Fury proved somewhat hardier: temporarily abandoned but reinstated for 1962 as the most youthful full-size Plymouth, which it remained through 1971, when Chrysler started playing name games again.

Check out specifications for the 1959 Plymouth Sport Fury on the next page. 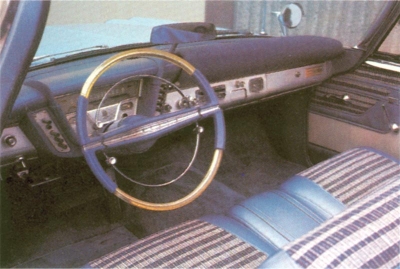 The driver controlled up to 305 horsepower in the 1959 Plymouth Sport Fury.
©2007 Publications International, Ltd.

The 1959 Plymouth Sport Fury was created to help Plymouth hold on to third place in the sales rankings, but those efforts would fail in the 1960s.