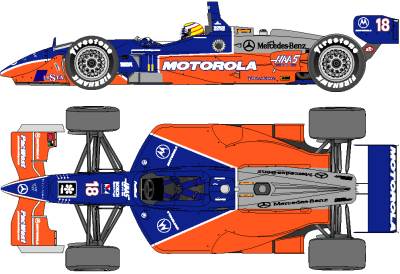 Modern Champ Cars are defined by their chassis. All Champ Cars share the following characteristics:

The chassis of a Champ Car is an amazing thing -- formed almost completely out of carbon fiber and aluminum honeycomb, a Champ Car chassis is extremely strong and lightweight. The entire chassis of the PacWest Motorola car weighs only about 1,000 pounds (455 Kilograms) when it arrives from the factory. The team then begins mounting things like the engine and electronics onto the chassis.

The chassis for the Motorola PacWest car is made by Reynard in England. Reynard supplies the chassis for a number of the teams. Other teams use chassis from Lola. Every year, the manufacturers release a new chassis and all of the teams start from scratch, attending testing sessions to try to gain a competitive advantage with their new chassis.

One reason that a new chassis comes out every year is because the rules evolve with each season. For example, in 1999, the CART rules reduced allowable aerodynamic downforce by 500 pounds, and all of the chassis manufacturers took this rule change into account in their designs. (The Information section of the CART Web site contains the complete rule book for Champ cars.)

When it arrives from the factory, the chassis comes complete with the body of the car, the suspension, the steering system and the transmission, and is called a rolling chassis. The team's job is to add things like the engine and electronics to the rolling chassis and tune it to the driver's style for maximum performance.

All Champ Cars have similar components:

The nose cone includes the front wings, the front suspension, steering mechanism and front tires. The front wing assembly is completely interchangeable depending on the type of track, the weather and other variables.
The "tub" (monocoque), or central section of the car, is where the driver sits.
The two side pods on either side of the driver house the car's electronics and the channels feeding air to the radiators. In this photo, you can also see the fuel filler area, which leads to the gas tank just behind the driver.
The rear suspension, rear tires and rear wing
A set of four cover panels: 1) The cover over the front suspension; 2 and 3) The covers over the two side pods; 4) The cover over the engine

One of the most important features of a Champ Car is its aerodynamics package.

The most obvious manifestations of the package are the front and rear wings, but there are a number of other features that perform different functions. A Champ Car uses air in three different ways:

One thing that you can see by looking at them -- Champ Cars definitely are not streamlined, aerodynamically perfect vehicles. You've got the wheels and suspension system sitting out in the open, the huge wings grabbing the air and converting it into downforce, the vents and protrusions on the body, and even the driver's helmet sitting out in the slipstream! It takes a great deal of power to overcome all of this drag, and that's one reason why Champ Cars need such amazing engines.

One part of the aerodynamics package that is not visible is underneath the car. A single carbon-fiber panel covers the entire underside and provides a completely smooth surface for the air to flow past. There are two air tunnels formed into this panel, underneath the two side pods. The tunnels taper so that the Bernoulli effect creates suction underneath the car. Both the wings and these tunnels contribute to the downforce.