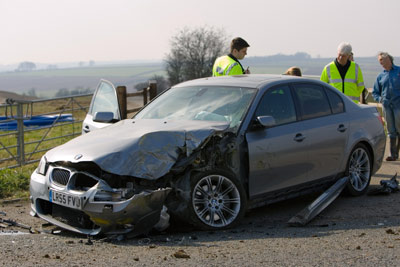 This BMW has obviously suffered a severe impact and appears extensively damaged. However, none of the damage was to the passenger compartment -- the front crumple zone did its job.
Tim Graham/Getty Images

Absorbing and redirecting impact is great, but it isn't the only safety issue auto designers have to worry about. The passenger compartment of the car has to resist being penetrated by outside objects or other parts of the car, and it has to hold together so the occupants aren't thrown out. You can't make an entire car a crumple zone because you don't want the people inside it to crumple also. That's why cars are designed with a rigid, strong frame enclosing the occupants, with crumple zones in the front and rear. Force reduction and redistribution is accomplished inside the passenger compartment through the

There are some parts of cars that simply can't crumple. The engine is the main offender -- in most vehicles, the engine is a large, heavy block of steel. No crumpling there. The same holds true for vehicles with aluminum engine blocks. Sometimes, cars have to be redesigned to move the engine farther back in the frame to accommodate a larger crumple zone. However, this can cause problems as well - if the engine is pushed back into the passenger compartment as a result of impact, it can cause injuries.

­Fuel tanks and battery packs, in electric or hybrid vehicles, also need to be protected from impact to prevent fires or exposure to toxic chemicals. They can be designed so that a section of frame protects the tank, but that part of the frame can bend away from the impact. For example, if a car is rear-ended, the frame bends up, lifting the gas tank out of the way and absorbing some impact. Newer cars have systems that cut off fuel supply to the engine during a crash, and the Tesla Roadster, a high performance electric car, has a safety system that shuts off the battery packs and drains all electrical energy from the cables running throughout the car when it senses an emergency [source: Tesla Motors].

Of course, it's easy to build crumple zones into a large vehicle with plenty of room to crumple before the passenger compartment is impacted. Designing crumple zones into small vehicles takes some creativity. A good example is the smart fortwo, an extremely small

and efficient vehicle. The driver and passenger are enclosed in the tridion safety cell, a steel framework with excellent rigidity for its size. The geometry is designed to distribute impacts across the entire frame. At the front and rear of the smart fortwo are what smart calls crash boxes. These are small steel frameworks that collapse and crumple to absorb impacts. Because the crash boxes are so small, other impact-absorbing features have been used to supplement them. For example, the transmission can act as a shock absorber in the event of a front-end collision. The short wheelbase of the fortwo means almost any impact will involve the tires, wheels and suspension. These components have been designed to deform, break away or rebound, helping absorb even more kinetic energy during an impact [source: smart USA].

Next, we'll see how crumple zones are helping to keep your favorite race car driver alive.

We've talked about the incredible kinetic force at work when a car crashes, but imagine the force involved when two trains collide. Because of the immense weight of a train, a collision can create forces dozens or even hundreds of times greater than those in a car crash. Yet crumple zones can be used even under these extreme circumstances. Using 3D computer simulations, engineers can build a crumple zone that will deform steadily and evenly during impact, absorbing the maximum force possible. The crumple zones are then placed on both ends of every car in a passenger train. In the event of a collision, the chain reaction of cars slamming into each other distributes force through all of the crumple zones in the train. That could absorb enough of the impact forces to prevent injuries to passengers [source: Machine Design].