­NASCAR is the number one spectator sport in the United States and televised NASCAR races are broadcast in more than 150 countries and 30 languages worldwide [source: NASCAR]. This multi-billion-dollar industry can track its humble beginnings to the dirt race tracks of Florida and North Carolina in the late 1940s.

The original NASCAR drivers were true stock cars, meaning they were no different than the family sedans being driven on American highways. They were lumbering Oldsmobiles, Buicks, Chryslers and Fords that had improvised seat belts, no protective roll cages and standard-issue tires that would blow out regularly [source: NASCAR].

A lot has changed in 60 years. About the only thing that modern NASCAR race cars have in common with street-legal automobiles is that they both have four wheels and an engine. The NASCAR racer of today is a custom car in every sense of the word. Every inch of it is finely tuned, obsessively engineered and built for speed.

The price of winning at NASCAR has gone up exponentially in the past 20 years. Gone are the days of Alan Kulwicki, who won the 1992 NASCAR championship on a measly $2 million annual budget. Today's top racing teams command budgets of well over $20 million a year [source: Clarke].

­The biggest chunk of these bulging budgets is earmarked for the construction, maintenance and upgrades of an entire fleet of race cars. One NASCAR racer costs a pretty penny, but m­ost championship racing teams keep 14 to 20 cars in racing condition at all times.

Traditionally, a healthy percentage of the racing budget was consumed by research and development in the constant quest to build a better racer. All of that might change with the recent introduction of the Car of Tomorrow (CoT), NASCAR's effort to improve driver safety and cut costs by requiring all Sprint Cup race teams to use cars with the exact same set of specifications.

Already s­ome team owners are saying that the CoT, while more expensive to build up front, will allow them to cut a significant amount out of their research and development budgets and lower their fleets from 20 race cars to 12 [source: Ryan]. That's because the CoT, unlike traditional racers, is designed to drive in all track conditions (short, long or fast, for example).

In the next section, we'll break down a NASCAR Sprint Cup race car by its engine, chassis and tires to see exactly how much one of these bad boys costs. ­

­To figure out exactly how much a NASCAR Sprint Cup race car costs, let's start with the heart of the machine: the engine.

Even before the Car of Tomorrow, NASCAR officials established strict rules about the size and specifications of a legal racing engine. The engine can be no larger than 358 cubic inches (5,867 cubic centimeters), which limits the amount of horsepower that the engine can produce [source: Martin]. And when NASCAR teams race on the Daytona International Speedway or the Talladega Superspeedway -- the two biggest tracks in the Sprint Cup Series -- engines need to be fitted with a restrictor plate to cut airflow to the engine to put a cap on racing speeds.

Most top racing teams build their own engines from scratch. The total cost of these engines, which take more than 100 hours to build, is anywhere between $45,000 and $80,000 [source: Martin, Hendrick Motorsports]. At Hendrick Motosports, a racing shop that supports four different Sprint Cup teams, a 95-person engine department cranks out more than 600 engines a year [source: Hendrick Motorsports].

Now let's talk tires. NASCAR racing tires have very little in common with standard street tires. For one thing, NASCAR tires have no tread, which allows them to grip the road surface easier. Plus they're much wider than regular tires, about 11 inches (28 centimeters) across [source: Martin]. Each one is constructed by hand from layers and layers of rubberized material reinforced by rubber-coated steel cables called beads [source: Mackinnon]. Each tire costs between $350 and $450.

­Interestingly, racing teams don't buy their tires. They lease them from Goodyear (the official tire supplier of NASCAR) on race day. Each team is allowed to lease 16 sets of four tires [source: Mackinnon]. That means that each NASCAR Sprint Cup team invests around $20,000 on tires alone for each race.

The chassis or body of a NASCAR race car is built for aerodynamics and safety, not comfort. There's only one seat (the driver's seat). There's no speedometer or gas gauge, no brake lights or headlights -- the doors don't even open [source: Martin]!

Before the introduction of the CoT, NASCAR race cars came in four only types: Ford Fusion, Cheverolet Impala SS, Dodge Charger and Toyota Camry. Even though these race car models had none of the perks of their street-legal cousins -- anti-lock brakes, air conditioning, fuel injection, front-wheel drive -- they still ran about $70,000 a piece.

Exact figures on the price tag of the Car of Tomorrow are not available, although legendary team owner Jack Roush of Roush Fenway Racing commented in July 2008 that the CoT costs him 50 percent more to build and 50 percent more to maintain after a crash, but that the huge discount on research and development brings the total cost savings to 25 to 30 percent [source: Ryan].

So who pays for all of these speed machines? We'll explore that question in the next section.

Who Pays the Cost of NASCAR Race Cars?

­Take one look at a NASCAR Sprint Cup race car and it's clear who's picking up the check for all of that super-engineered beauty. Their names are plastered all over the hood, the doors, the rear bumper -- in fact, every piece of real estate on a NASCAR race car is for sale. These are the venerable NASCAR sponsors, without whom none of this high-speed excitement would be possible.

Corporations shell out big money to be the primary sponsor of a Sprint Cup race team, between $20 and $25 million or more for long-term contracts [source: Margolis]. Primary sponsorship entitles a corporation to prime advertising spots on the hood of the car, on the front of the driver's and pit crew's uniforms, on the sides of the big rigs that haul the race cars across the country, and most importantly, unrestricted use of the driver and his car for print, radio and TV ads.

Then there are secondary or associate sponsorships. In this case, $2 million or $6 million might buy you space on the lower part of the hood, some of the side panels, and if you're lucky, a primary hood spot for some of the lower-profile races [source: NASCAR].

Corporate sponsors not only pay for the car, but help cover all of the research and development and maintenance costs associated with a big-budget racing team. At Hendrick Motorsports, which employs 500 people, sponsors are estimated to cover 65 to 70 percent of all infrastructure costs. The rest is paid for by race winnings and other endorsement deals [source: Margolis].

In the early days of NASCAR racing, the relationship between the sponsor and the race team was predicated on winning. The old adage was "Win on Sunday, buy on Monday," especially when the winning car was available at the local Ford dealership. The first NASCAR sponsors in the early 1960s paid about $200 per race [source: NASCAR].

But now the sponsor/racer relationship is a lot more complex. Instead of being purely about winning, it's about giving the sponsor the most bang for his buck -- i.e. the best return on his investment [source: Margolis]. This can happen on the track or off the track. Even if a big-name driver like Jeff Gordon isn't winning races, his image and personality can still sell boxes of cereal or quarts of motor oil. Today, primary sponsors pay closer to $500,000 a race, so the stakes are considerably higher.

When economic times are tough, race teams need to get creative. For example, when gas prices exceeded $4 during the summer of 2008, some NASCAR teams went shopping for special fuel sponsors [source: Smith]. Interestingly, this was to cover the cost of the diesel fuel for hauling the cars around, not the racing fuel (which is free from NASCAR sponsor Sunoco).

For even more information about NASCAR and the business of sports, follow the helpful links on the next page. 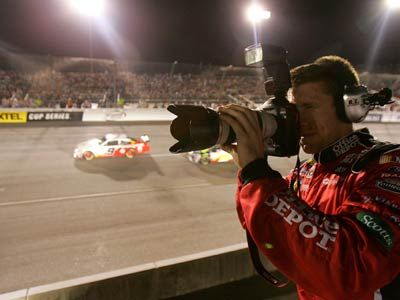 Up Next
How NASCAR Broadcasts Work
Explore More 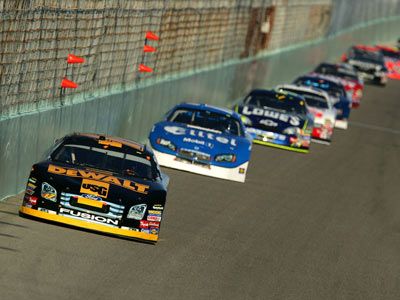 You May Like
How Racing Grooves Work
Explore More