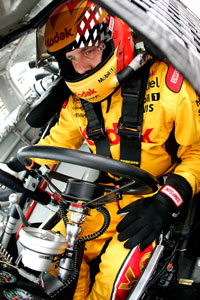 As you can see, there's not much room for bulky radio equipment in a NASCAR race car.
Jason Smith/­Getty Images for NASCAR

­The preferred source for two-way radio systems used by NASCAR teams is Racing Radios, a unit of Diversified Electronics. Based near Atlanta, Ga., Racing Radios has been providing NASCAR officials and teams with communications equipment for more than 30 years. In 2005, the firm partnered with NASCAR title sponsor Sprint Nextel to take racing communications to a new level.

There may be more than 100 FCC licensed radio broadcasts going on during a major NASCAR event. Racing Radios programs the individual team's frequencies for the drivers and crews, as well as NASCAR officials, safety and security staff and others who need radio communications capability.

According to Racing Radios spokesperson Tony Cornacchia, most NASCAR drivers and teams buy their own communications equipment. Many teams custom order their crew communications systems, tuning them to their specific needs. Some teams have upgraded to digital systems, while others continue to utilize analog equipment. Some still use intercom systems in their pits.

Today, most race cars are equipped with a Motorola two-way portable radio for the driver's use. The radio is carried in a leather pouch or custom box placed to the driver's left in a location where volume and channel selection controls will be easy to reach.

The driver's helmet, which carries a microphone and semi-custom earpieces fitted for comfort, plugs into the harness. A push-to-talk switch is attached to the steering wheel and a short whip antenna is mounted on the roof. A Racing Radios wiring harness connects the radio system components while a dedicated battery powers the audio system.

Many teams outfit their entire pit and support crews with custom-engineered, hand-built headphones and two-way radios ordered through Racing Radios. Multi-car teams may choose to connect even more people through their radio communications network. Active Noise Reduction (ANR) technology helps to cancel out distracting background noise. Exceptional communication is one of the reasons a 21st century NASCAR pit crew can change four tires and refuel a race car in around 13 seconds -- and do it 10 or more times in a single race.

Racing Radios says their systems function well even at the highest track speeds and almost never suffer from interference or dead zones.

In the next section, we'll plug ourselves into the communications loop and see who's talking on the race car radio, and why.

NASCAR track officials were recently equipped with new Motorola MOTOTRBO professional digital radios in a major communications upgrade. With responsibility for conducting more than 1,200 races on 200 tracks spread across North America annually, the officials need a reliable, flexible radio system that delivers high-quality audio. About 80 NASCAR race officials, including spotters and timing and scoring persons attend the two races conducted at each event. Emergency crews, vendors, admission attendants, spectator parking crews and media representatives also monitor the official radio channels. A major benefit of the MOTOTRBO radio is that it seamlessly integrates with analog systems not yet converted to digital. That capability means fans with analog scanners can still listen to track announcements [source: Motorola].