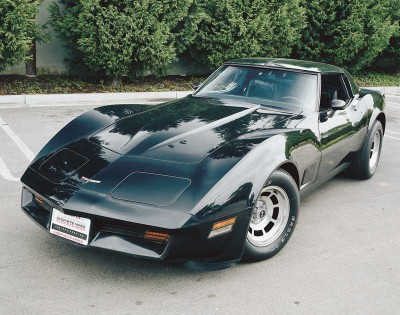 Corvette's crossed-flags emblem was again redrawn as a small but effective 1980 cosmetic change, and it was carried over for '81. See more classic car pictures.

Weighty gas guzzlers were a dying breed, being victims of the new Corporate Average Fuel Economy standards. This meant the 1980 Corvette would have to be put on a diet in order to survive.

First-stage measures made for 1980 slimmed the car by some 250 pounds. The differential housing and front-frame crossmember were switched from steel to aluminum, and greater use was made of plastics throughout the car. The aluminum intake manifold previously used on the L82 engine was extended to the base L48, which lost five bhp to emissions tuning -- back to 190 bhp at 4,400 rpm and 280 lbs/ft torque at 2,400 rpm. However, the L82 actually gained another five horses -- up to 230 in all.

California's increasingly stringent emissions standards forced buyers there to settle for a detoxed 180-bhp 305 small-block, which was available only with the automatic transmission.

Also in the interest of better mileage, the previously optional front and rear spoilers were slightly reshaped and made integral with the bodywork, and the grille was raked back slightly. As a result, the coefficient of drag (Cd) fell from 0.503 to a more respectable 0.443 -- still not great but an improvement none the less. Exterior chrome was now kept to a minimum, which meant removing the crossed-flags emblems from the front fenders.

Other changed to the 1980 Corvette included newly standardized air conditioning and tilt/telescope steering wheel, relocated power door lock buttons, and a speedometer calibrated to only 85 mph -- yet another government mandate. Finally, the two behind-the-seats storage compartments were combined, though the battery remained in its separate cubbyhole directly aft of the driver. 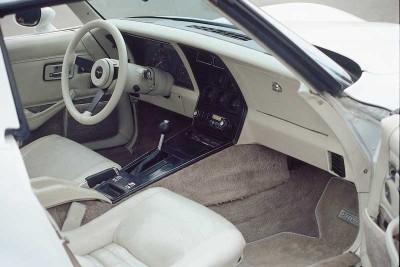 Door lock buttons were moved in the 1980 Corvette, and the speedometer was now calibrated to only 85 mph due to government regulations.

The weight-saving measures came none too soon, for early 1979 had brought another fuel crisis down upon America. This time, OPEC had less to do with the energy crisis than the overthrow of the Shah of Iran. But its effects on Americans were much the same: increasingly tight supplies of ever-more expensive fuel that sent the car market and the national economy as a whole into a tailspin.

Once again the Corvette's future looked dubious, yet it continued to ride high. Although model-year volume was down some 20 percent from 1979, the 1980 tally of 40,614 units was still quite respectable for a heavy, thirsty, specialty car that had become almost too expensive -- now at a generous $13,140.24, sans options -- for its target buyers.

As had been true since the very beginning of the Shark generation, press opinion of the 1980 Corvette was mixed. However, 0-60 mph times continued to be a highlight, clocked at between 7.1 and 7.7 seconds for the L82. Some scribes took exception to Chevy's slenderizing measures -- especially the "lighter-duty" rear axle -- and the greater overall emphasis on fuel efficiency. Fit and finish problems were still noted, however.

The 1980 Corvette shed 150 pounds while gaining standard spoilers fully integrated with a reshaped nose and tail. The cockpit and emblems were updated, too. Here are the specifications for the 1980 Corvette: