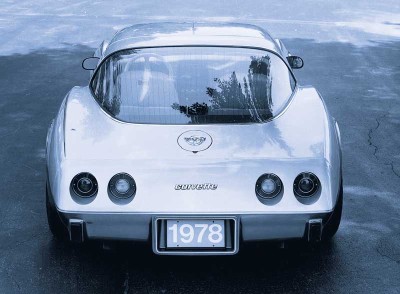 Shark appearance was completely transformed for 1978 as the coupe exchanged its notchback roofline for a sweeping "glassback." The change was neither cheap nor easy to effect, but it was necessary to keep the car sufficiently fresh until a truly all-new Corvette was ready.

Something special needed to be done to the current Corvette, rather than introduce an all-new model, to commemorate the car's silver anniversary in 1978. But how would Chevy accomplish this on a tight budget? The answer proved as simple as trimming away the old "flying buttress" sail panels and substituting a large, compound-curve rear window. Voilà! The Corvette fastback was back.

Not only was this a relatively inexpensive alteration that freshened the car's appearance, it improved rearward visibility in the bargain. Even better, it made for a slightly larger and more accessible luggage area.

In addition to adding Silver Anniversary badges to the exterior, changes for 1978 included squared-up instrument-panel housings for the speedometer and tachometer to match the previous year's revamped console gauges, redesigned door panels with new armrests and integral door pulls, and -- at last -- a real glovebox. The car's fuel-tank capacity increased from 17 to 24 gallons, and the windshield wiper/washer control was moved from the steering column stalk back to the dashboard.

The Corvette had the dubious distinction of being one of America's most frequently stolen cars, so the standard anti-theft system was rewired on the 1978 to encompass the T-tops, which were all-too-easy to pinch. To the same end, a new roller-blind security shade was added to keep would-be thieves from peering into the cargo area through the big new backlight. The glass T-tops promised for 1977 were now genuinely available from the factory, and both they and the normal fiberglass panels were modified to provide more headroom and easier locking. The three-point seat belts were given a single inertia reel, and belt guides were eliminated.

Power ratings for 1978 shifted a bit in deference to emissions standards, as well as to the government's new Corporate Average Fuel Economy (CAFE) mandates that took effect that year. As before, there were two basic versions of the veteran 350 small block from which to choose. The base L48 produced 185 bhp in "49-state" trim and was the only choice for customers in California and high-altitude areas, where it generated 175 bhp. For an extra $525, the L82 delivered 220 bhp via a dual-snorkel air intake and a revamped exhaust system designed to reduce back-pressure.

A close-ratio four-speed manual gearbox returned as an exclusive option for the L82; a 3.70:1 rear axle made this the best-performing drivetrain combination available. The same gearset was also offered for the L82 with the wide-ratio four-speed, while the L48 came with a 3.36:1 axle (also available for the L82/wide-ratio setup). Also offered for the L82 was a revised Turbo-Hydra-Matic of the new, so-called "CBC" type, with a low-inertia high-stall-speed (2,400 rpm) torque converter. The automatics pulled a 3.55:1 final drive, except with the L48 at low altitudes, where it was 3.08:1. Such juggling reflected the relative difficulty of balancing performance against low emissions and decent fuel economy.

The main chassis change for '78 was first-time availability of optional 60-series tires -- raised-white-letter Goodyear GTs in HR60 size (225/60R-15 metric), though they necessitated some shearing of the fender liners. Aramid-belt construction contributed to a claimed improvement in ride smoothness.

The FE7 Gymkhana Suspension package was still around, though its price had gone up to $41 from the original $7 bargain. As before, it included heavy-duty shocks and higher-rate springs all around, plus a rear anti-roll bar and a thicker front stabilizer.

The Corvette's 25th anniversary sparked the creation of two special edition models that year. Find out more about them in the next section.


Looking for more information on Corvettes and other cars? See: 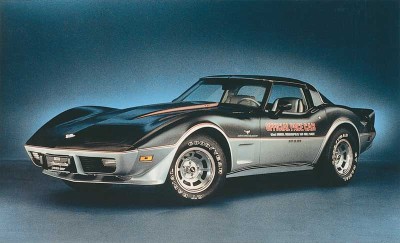 Besides celebrating Corvette's 25th birthday in 1978, Chevy was again tapped as pace car for the Indy 500. In celebration of that, Corvette buyers were treated to this special Indy Pace Car Replica model.

Cashing in on the birthday cachet, Chevy offered the 1978 Corvette with "25th Anniversary paint," which was a relatively inexpensive striping package that would be viewed as a desirable option and could thus be considerably marked up. Before he retired, Bill Mitchell had suggested a Silver Anniversary model in his favorite color -- silver, appropriately enough -- and it appeared as the $399 B2Z option package. The first factory two-toning offered since 1961 (save for the removable hardtops for the now-discontinued roadster), it presented silver over a gray lower body with a separating pinstripe, plus aluminum wheels and dual "sport" outside mirrors as mandatory options, which added another $380 to the cost.

In another bit of anniversary schmaltz, Chevrolet had negotiated with the Indianapolis Motor Speedway to have a modified Corvette chosen as pace car for 1978's Indy 500. Initially, 2,500 replica Corvette pacers -- 100 for each year of production -- were scheduled for sale on a first-come, first-serve basis, but with Chevrolet having 6,200 dealers at the time, it was decided that any such Corvette special would have to be built to a minimum order of 6,200 units so that each showroom could have at least one. Thus, what was officially called the Limited Edition Indy Pace Car Replica Corvette made up some 15 percent of total production -- hardly "limited" at all.

Like the Silver Anniversary model, the Pace Car Replica was actually an option package -- RPO Z78 -- with two-tone paint as its main distinction. Here it was black over silver metallic with a bright red pinstripe in between, but a spoiler was tacked on at each end to alter appearance more dramatically. The front spoiler was similar to the one on the contemporary Firebird Trans Am, wrapped under and around to blend into the wheel wells, while the prominent rear spoiler curved down at its outboard ends to meet the bodysides, recalling the '69 Aero Coupe show car.

Pace Car interiors reflected Bill Mitchell's influence, with full silver leather or silver leather/gray cloth upholstery and gray carpeting. Chevrolet had scheduled new Corvette seats for 1979, but the program was rushed forward so that the 1978 Pace Car could have them first; these offered a new thin-shell design with more prominent (some said too prominent) lumbar support. Also, Turbo Hydra-Matic was supposedly the only transmission available, but four-speed manual showed up on quite a few models.

Base-priced at $13,653.21, the Pace Car Replica was quite a boost over the $9,351 standard model. But because it looked like an "instant collectible," every one was sold for more than list price. This rabid interest tempted some owners of standard 1978s to try and pass them off as factory Pace Cars. All anyone needed was a spray gun, a black or silver car with the right options, and a friend in your dealer's parts department willing to sell you the two spoilers and special silver cabin trim (though most counterfeiters would forget about the special seats).

If the car was now long in the Shark's tooth, its 1978 changes seemed to rejuvenate it all out of proportion to their magnitude, at least according to the auto magazines. The reviewers praised the car's classic strengths to high heaven, especially an L48/automatic's 7.8-second 0-60 mph time and top speed of 123 mph, and noted its more refined, less teeth-rattling ride. On the other hand, they continued to note its weaknesses, like a rear end that tended to step out during sharp cornering maneuvers and a cabin that was still cramped and uncomfortable.

Corvette marked its silver anniversary for 1978 with a new fastback roofline that greatly increased luggage space, though the fixed glass meant you still had to load up from inside. Honoring the milestone birthday was a $399 two-tone Silver Anniversary paint package. Here are the specifications for the 1978 Corvette: