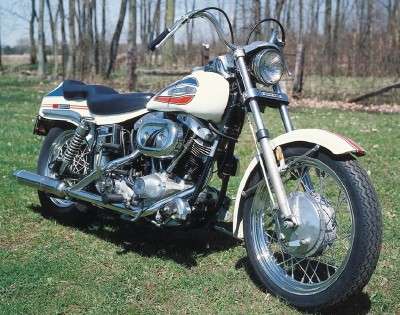 The 1971 Harley-Davidson FX Super Glide motorcycle, Harley's first "factory custom" bike, failed to attract the audience Harley had hoped it would and was a sales disappointment, finding fewer than than 5,000 buyers.

In an effort to compete head-on with the aftermarket suppliers, Harley-Davidson ushered in its first "factory custom" for the 1971 model year. By combining pieces from two popular models, the "Big Twin" FL and the XL Sportster, the company hoped to provide buyers a new breed of Harley.

Stripped of its electric starter, the FX could be fitted with a smaller battery and battery box. The forks and front wheel were taken from the XL's parts bin, as was a smaller-diameter headlight and trademark headlight cover.

The frame, 74-cubic-inch Shovelhead engine, and rear suspension originated from the FL. The dual tanks were from the FLH.

A fiberglass tail section was styled after a similar piece used on the previous year's Sportster, and all the bodywork could be covered with a special Sparkling America paint scheme.

New and exciting as it was, the market failed to respond to the first Super Glide, and only 4,700 found buyers. By comparison, more than 10,000 Sportsters were sold the same year.

The Super Glide returned for 1972, but some of its pieces did not. The tail section disappeared, replaced by a traditional steel fender assembly. In this form, the Super Glide met with greater success, and factory customs would eventually become Harley-Davidson's stock-in-trade. 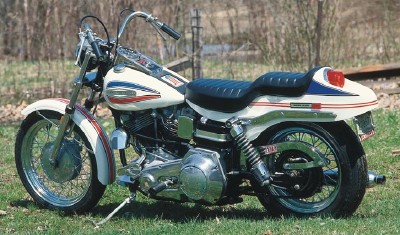 Harley's first factory custom was a pretty nice sum of its parts, though it didn't go over well at the time.

Large, simple, clear, in the Harley-Davidson way.
The 1971 Harley-Davidson FX Super Glide could be ordered with a special Americana paint scheme.
The "boat tail" rear fender was styled after the one that appeared on the 1970 Sportster.