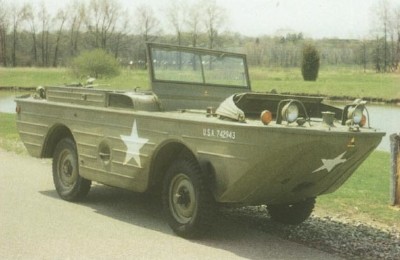 It was an intriguing concept: a seagoing jeep. The Army had flirted for years with the idea of an amphibious vehicle. Then during World War II, several types were actually built -- among them the GP-A: General Purpose-Amphibious, or the 1942 Seep Jeep.

Designed by the Marmon-Herrington Company in cooperation with the boat-building firm of Sparkman and Stephens, the GP-A was based on the GPW-Ford's version of the familiar World War II jeep.

Several distinct hulls were built and tested, first in scale model form and then at full size. Somehow, while this was going on there was no jeep available for use in the experiments. All the engineers had to work from was a table of specifications, and those specs understated the jeep's weight by about 30 percent. This factor had a serious negative effect upon the performance of the end product.

When the pilot vehicle was ready, tests were run in the Huron River, at Dearborn. Ranking officers from the various branches of the service made comments, although adequate endurance and performance tests had never been made. There were those who expressed concern over this seemingly premature standardization of the design.

However, it was February 1942 by this time, two months after the Japanese attack upon Pearl Harbor. The need for water-going jeeps was declared by field generals -- General George Marshall in particular -- to be urgent. Besides, Ford was pressuring the government for a contract, even suggesting that production facilities might not be available unless the project got under way immediately.

The potential seemed enormous. Popular Science, describing the Seep as "essentially a specially equipped jeep with a steel hull built around it," noted, "This seagoing jeep operates on either land or water, and can pass from one medium to the other with a single minor adjustment by the driver, during which the car doesn't have to stop. Its possibilities as a reconnaissance vehicle are startling. With it an advance patrol can creep up back roads to a river, scout along the shore, cross at any point to investigate the enemy's territory. It can race back with its information about as fast as any other jeep -- upwards of 60 miles an hour on good roads. Twenty of them can ferry 100 fully armed men across water to strike the enemy from the rear."

Controls were identical to those of the land-based jeeps, with the addition of two more handles, located just behind the transmission lever. One of these engaged the propeller, while the other operated the bilge pump.

A letter of intent was issued on April 11, 1942, calling for an initial production run of 5,000 of the little amphibians, and the project got under way. Then, suddenly, after only 12,778 had been built, production was halted.

Why? What had gone wrong? The Germans were apparently doing well enough with their Schwimmwagen, though their seriously underpowered Kubelwagen was a bust. Denfield and Fry, quoting from a 1971 Army Materiel Command pamphlet, explain: "Insufficient testing of early production models, inadequate inspection and supervision of production, failure to provide for a continuing development program, failure to provide adequate training, and, particularly, failure to consult the using services before production began resulted in early rejection of the project as a technical and tactical failure."

Civilians, however, appear to have seen no end of possibilities in the GP-A. Especially Ben Carlin, an Australian engineer, who made a nine-year, round-the-world trip in one of them. According to Bart H. Vanderveen, writing in Challenge, "Carlin first saw the vehicle when he was in the forces in India, and said, 'You know, with a bit of titivation you could go round the world in one of those things.'"

After demobilization, Carlin went to the United States, where he purchased a GP-A at an Army surplus sale. He named it, appropriately enough, Half Safe. After spending considerable time adapting the amphib to his purposes, Carlin, with his American wife, set out from Halifax, Nova Scotia, in July 1950.

As Vanderveen recounts the story, "They crossed the Atlantic, sailing via Madeira to Cap Juby, Spanish Sahara. From (here they drove and sailed by way of Gibraltar and eight West European countries to London. There, during a two-year stay, the vehicle was extensively rebuilt and modified for the second lap -- London, India, Australia, Japan, San Francisco, New York."

Meanwhile, Elinore, Carlin's wife, jumped ship in India and made her way back to the United States, where she filed for divorce. Carlin flew to his hometown of Perth, Australia, where he recruited a young yachtsman, and the voyage continued. However, Ben Carlin evidently had an irascible disposition. Upon reaching Kagoshima, Japan, in late 1956, his young helper also took his departure.

Early in 1957, accompanied this time by an American named Boye Lafayette DeMente, Carlin took to the sea once more. Four months later, Half Safe put in at Anchorage, Alaska. DeMente, who had quite enough of Carlin's nasty temper, flew home to Phoenix. Sometime later he learned that Ben Carlin had made it to New York, completing his globe-circling tour.

Accompanied by Half Safe, Carlin later took to the lecture circuit, eventually returning to Perth, where he worked at a yacht harbor until his death.

Too small and too slow to be much of a boat, yet too big and too clumsy to serve as a jeep, the GP-A appears to have represented the worst of both worlds. One wonders if it might have been more successful had normal development and testing procedures been permitted to take place.